Twitter Users Go Off On Wrong Marcelo After Own Goal In World Cup Opener - NESN.com Skip to content

The majority of angry Twitter users watching the 2014 World Cup on Thursday afternoon probably shouldn’t have “attention to detail” listed on their resumes.

Brazil got off to a rough start in its opening game against Croatia as Marcelo knocked in an own goal early on in the game. The mistake gave Croatia a one-goal lead over the heavily favored Brazil, and it also gave the Internet some ammunition as the masses wasted no time unleashing on the defender on Twitter — or so they thought.

While Marcelo’s Twitter mentions were mostly spared, Marcello — a European model who spells his name with two l’s — received the brunt of the harsh, obscene and nasty comments. The model wasn’t amused by the hate being hurled at him, so he sent out a plea to divert the anger to who it was initially intended for.

While it certainly isn’t his fault that Twitter has trouble with spelling, Marcello also had a request for his similar namesake that would benefit the both of them.

Marcelo didn’t deliver on that favor, but it didn’t matter as Brazil went on to win 3-1.

Xander Bogaerts Unsure Of Connection Between Slump, Playing Third Base 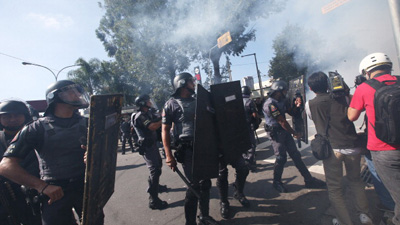