Final, 1-0 Germany: It’s all over in Recife, Brazil. Germany defeats the United States.

Team USA fell to a powerful Germany, but both teams are left standing at the end of Group G play.

It’s no surprise that Germany advances as the group winner. After all, it is one of the favorites to win the tournament. But the United States has shocked the world, escaped the Group of Death and advanced to the Round of 16. Team USA finishes second in the group with four points. Portugal’s win against Ghana also gave it four points, but the Americans advance on account of their superior goal differential — zero to minus three.

The difference in the end was Portugal’s and the United States’ games against Germany. Portugal lost 4-0. Team USA lost 1-0.

Thursday’s game was the one-sided affair many predicted that it would be. Germany controlled the proceedings from start to finish, created more quality scoring chances, and Muller’s finish was worthy of the esteem in which he and Germany currently are held.

But the United States demonstrated the grit and determination that characterizes its progress out of the Group of Death. The Americans were compact and focused in defense, and Gonzalez’s timely interventions and Howard’s saves maintained the contest’s tension and competitiveness.

The weather conditions and the defeat might have ruined the spectacle, but Portugal’s victory kept the United States’ World Cup dream alive, which is what the last few hours have been about.

After Team USA’s flowing move from the halfway line to the Germany penalty area, Lahm blocked Bedoya’s shot, which looked bound for the bottom corner of the goal.

After the ensuing corner kick, Bradley crossed to Dempsey, whose header flew over the crossbar.

90th minute, 1-0 Germany: The fourth official indicates there will be four minutes of extra time.

89th minute, 1-0 Germany: Schurrle comes on for Ozil (who was largely ineffective) in Germany’s third and final substitution.

88th minute, 1-0 Germany: Germany has all the possession, but the United States is ably absorbing the pressure in an effort to see out the game.

Yedlin likely will play at right back, while Johnson will push forward into the right midfielder slot that Zusi occupied.

80th minute, 1-0 Germany: Howard saves Howedes’ tame shot, but the game still is a tense one.

The United States will advance if these scores hold.

76th minute, 1-0 Germany: Germany is making another substitution, bringing on Gotze for Schweinsteiger.

It’s an offensive-minded switch, as the attacking midfielder Gotze is more of a goal threat than Schweinsteiger, who is more of a deep-lying playmaker.

74th minute, 1-0 Germany: Jones and Bedoya are down after they collided in Germany’s half.

70th minute, 1-0 Germany: Germany has controlled the last few minutes of the game, pinning the United States back in its own third with sustained spells of possession.

As was the case in the first half, Germany isn’t turning that possession into quality scoring chances.

63rd minute, 1-0 Germany: Beckerman is cautioned for a foul on Schweinsteiger.

59th minute, 1-0 Germany: Asamoah Gyan scored for Ghana to tie the score at 1 in its Group G game against Portugal.

A draw in that game would mean the United States advances to the Round of 16.

59th minute, 1-0 Germany: The United States is making a change in the midfield. Bedoya comes on for Davis.

Howard initially saved Mertesacker’s header, but it fell to Muller, who powerfully curled his shot around Besler and Howard and into the goal — a world-class strike by a world-class player.

52nd minute, 0-0: Klose connects with Muller’s cross at the far post but can’t put his header on target.

47th minute, 0-0: Gonzalez stymies another German attack with a heroic piece of defending.

Gonzalez surprisingly started ahead of Cameron on the U.S. backline. The decision is looking like a good one, as Gonzalez has been an immense presence and is making a huge impact so far.

Germany made one substition at halftime, bringing on Miroslav Klose for Podolski.

Halftime, 0-0: That’s the end of the first half. We’re goalless in Recife.

The United States is keeping Germany at bay so far. The Germans had better possession and scoring chances in the first 45 minutes, but Team USA benefited from timely defending and Howard’s reliable goalkeeping. Not content to bunker in its own half, the United States demonstrated its counter-attacking quality and created a few chances of its own, which helped confirm the halftime stalemate.

The weather conditions have had an equalizing effect on the game. The wet field is subduing Germany’s skills advantage and making it difficult for it to attack with its usual numbers or at its normal pace. Players might be concerned about slipping in the wrong part of the field, so Germany is largely attacking as individuals, rather than as one unit.

This plays to the United States’ strengths. Gonzalez and Besler are focused in the middle of defense. As long as Germany doesn’t catch Beasley and Johnson upfield (as it did on a couple of occasions in the first half), its attackers will continue to be isolated and outnumbered in the final third.

The United States will need Dempsey to make a greater impact in the second half. The U.S. captain has been muted by German center backs Hummels and Mertesacker. Bradley also must improve in the second period. His ability to control the game’s tempo and make incisive passes will help Team USA create scoring chances when the few opportunities to do so present themselves.

45th minute, 0-0: The United States is doing a good job of managing the last few minutes of the first half. The Americans are maintaining a good defensive shape, which is limiting Germany’s opportunities as the game approaches halftime.

37th minute, 0-0: Gonzalez is cautioned for a professional foul on Schweinsteiger.

35th minute, 0-0: Howard makes another save — this time on Ozil’s effort — but he can’t hold onto it. Luckily, Gonzalez arrives and clears the danger once again.

34th minute, 0-0: Meanwhile, Portugal has taken a lead against Ghana after Black Stars defender John Boye scored an own goal.

The Portugal goal is good for the United States, but the Americans must take care of business on their own end.

31st minute, 0-0: Germany comes back with a chance of its own, as Kroos launches a stinging shot from outside the penalty area, which Howard saves.

29th minute, 0-0: On the field, Jones collides with the referee and is down.

After ceding territory and possession to Germany for most of the first 30 minutes, the United States is starting to show more ambition going forward.

28th minute, 0-0: As we near the half-hour mark, many fans are only now arriving at the stadium. The rain caused flooding, which made it difficult for many to reach the stadium in time for kickoff.

22nd minute, 0-0: Zusi cuts inside from the left and fires a powerful, curling, right-footed shot inches high of Neuer’s goal.

It was the United States’ first meaningful scoring chance.

13th minute, 0-0: Lahm, Germany’s defensive midfielder, is causing problems for the United States by playing higher up the field and creating chances inside the U.S. third of the field. Germany might have taken the lead were it not for Gonzalez’s last-second interventions inside his own penalty area.

Bradley and Dempsey must quickly pressure Lahm or he will continue finding his teammates in those tight spaces.

11th minute, 0-0: Howedes is cautioned for dragging down Johnson, who had blown by him.

10th minute, 0-0: Germany is making inroads in the United States half but can’t connect with the final pass.

Sixth minute, 0-0: As expected, Germany is enjoying most of the possession, but the driving rainstorm that is drenching Recife, Brazil, has made the field at the Arena Pernambuco incredibly slow.

Kickoff: Here are the lineups:

Team USA can advance to the Round of 16 with a win or a draw against Germany — one of the most powerful forces in the soccer world.

USA head coach Jurgen Klinsmann was born in Germany and represented the country in World Cups as a player and coach. Now an American citizen, Klinsmann is hoping to accomplish one of the greatest feats in U.S. soccer history by leading his team out of the so-called “Group of Death.”

The game kicks off at noon ET. Stay right here for all the action. 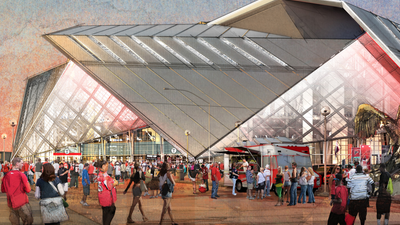 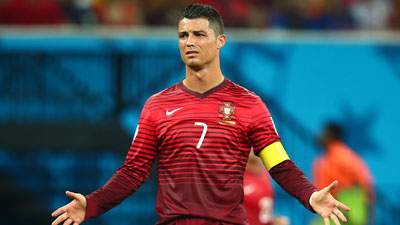