Bruins GM Peter Chiarelli: 'We've Been Looking At A Couple Of Trades' - NESN.com Skip to content The Boston Bruins didn’t make a huge splash on the first day of NHL free agency, but they’re still looking to acquire players for next season.

Bruins general manager Peter Chiarelli told reporters Tuesday during a conference call that he’s looking at the trade market and the secondary free agent market to see if he can improve the roster.

“We’ve been looking at a couple of trades,” Chiarelli said. “I don’t know when/if they’ll come down.”

Chiarelli also said there are “seven to eight names subject of trade discussion. … There’s a couple guys who I think could fit with our team.”

Chiarelli noted that the Bruins lack a right-handed shot on the left side of the power play. That player, whether he is acquired from outside the organization or within, will be a forward.

The Bruins GM specifically is looking for a top-nine forward, and he also acknowledged that a couple of the organization’s young players will compete for roster spots in training camp. That group includes Matt Fraser, Ryan Spooner and Alex Khokhlachev. It’s also possible that Daniel Paille will move up from the fourth line into a top-nine role, which he has fulfilled several times during his Bruins career.

As for Jarome Iginla’s departure to the Colorado Avalanche, Chiarelli said he explored ways to create enough salary cap space to re-sign the veteran winger, but in the best interest of the organization, he opted to not make any of those moves.

So, who will take Iginla’s right-wing spot on the first line? “We’ll find someone from within or from a trade,” Chiarelli said.

One internal candidate is Loui Eriksson, who went through an up-and-down first season in Boston plagued by two concussions. Chiarelli is comfortable with Eriksson playing alongside David Krejci and Milan Lucic, noting the Swedish winger’s excellent two-way skill set and high hockey IQ.

The Bruins have limited cap space — about $5.6 million if Marc Savard is put on LTIR — which will make signing top-six forwards from the free agent market difficult. Luckily for the Bruins, they have plenty of young forwards ready for an increased role at the NHL level, and many of them will have a chance to prove themselves this fall.

“We’ve got a strong core,” Chiarelli said. “I think there are guys who will replace the goals we lost.”

Here are some other notes and quotes from Chiarelli’s media availability:

— The Bruins have received a couple of calls from opposing teams about Jordan Caron, who’s a restricted free agent. Chiarelli believes Caron can be a full-time NHL player. He also said Caron would accept a trade.

— Chiarelli said the Bruins might try a few centers on the wings this season if needed. He listed Chris Kelly, Spooner and Khokhlachev as players who could fit that role.

— Chiarelli revealed that the Bruins signed defenseman Chris Breen to a free-agent contract. Breen had zero goals and two assists in nine games for the Calgary Flames last season.

— Torey Krug and Reilly Smith are restricted free agents, but they also are entry-level players, so they cannot negotiate with other teams.

— Chiarelli said the Bruins have nine NHL-caliber defenseman, including the eight currently on the roster and Providence’s David Warsofsky, who had one goal and one assist in six games for Boston last season. 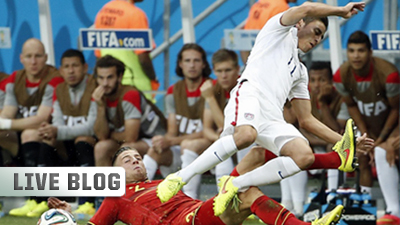