Bruins Should Fill Forward Vacancies From Within Organization - NESN.com Skip to content The Boston Bruins will have at least two forward spots to fill before the 2014-15 NHL season.

Given the lack of talent on the free agent market, combined with the Bruins’ lack of salary cap space, the best route is to fill the vacant spots on the bottom two lines from within the organization.

Luckily for the B’s, most of these young players already have NHL experience, and some of them were part of last season’s playoff run.

“Right now I think there are three spots there. Maybe at the end of the day there will be two for (the young guys) to vie for,” Bruins general manager Peter Chiarelli said last week. “So I feel good, I think our guys are coming — you?d like them to get a chance. And that is kind of what we are looking at going into the year, and I feel good about it now.”

Who Replaces Jarome Iginla On The First Line?

Loui Eriksson is the obvious and most logical choice to fill this void. He’s not the rugged, power forward-type player that Iginla is, but Eriksson has underrated strength, and his defensive abilities and high hockey IQ would allow him to mesh well on the top line alongside David Krejci and Milan Lucic.

Chiarelli said last week that he doesn’t have any issues with Eriksson moving up in Boston’s lineup.

“It would be nice to get a right shot — that would be a priority at some point — but I have no problem with Loui (Eriksson) playing on that top line, and I?ve talked to (Krejci) about it, and he welcomes it. If you watch how Loui plays, he plays a real give-and-go game, and he?s very smart, passes to areas. … He?s very compatible with (Krejci).”

Iginla’s 30 goals won’t be easy to replace, but Eriksson scored near that rate as a first-line winger with the Dallas Stars. The 28-year-old winger averaged 29.5 goals per year in his last four non-lockout seasons in Dallas, and that was without a playmaker of Krejci’s caliber playing alongside him.

If Eriksson is healthy on a consistent basis, he’ll be a great fit on the first line.

Second Line Likely Will Be Unchanged

Brad Marchand and Patrice Bergeron have fantastic chemistry after playing alongside each other for about four seasons. They also form one of the league’s best penalty-killing forward duos. Reilly Smith filled the right-wing role next to them last season and in the playoffs while proving he belonged with 51 points (20 goals, 31 assists) in 82 games.

What Will the Third and Fourth Lines Look Like?

Daniel Paille could move up to the third line, which is a role he has played a bit in the past. The best option would be for him to stay on the fourth line alongside Gregory Campbell, and that would allow Ryan Spooner to play on the third line as a winger with Carl Soderberg (at center) and Chris Kelly.

A Spooner-Soderberg-Kelly trio would give the Bruins excellent speed, size, playmaking skill and defensive responsibility on the third line. Spooner has shown that his speed is an asset, and even though he projects to be a top-nine center at the NHL level, he’s not skilled enough on faceoffs to play that role right now.

Shawn Thornton’s open spot on the fourth line could be filled by Matt Fraser or Justin Florek. Fraser, who tallied two points in four playoff games, would provide more of a scoring punch to that line. Florek is a more physical and better defensive player. Boston doesn’t need to find an enforcer to replace Thornton because it has at least 4-5 guys willing of dropping the gloves when needed. 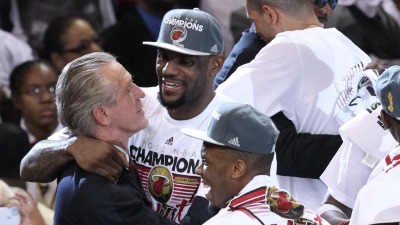 Report: Carmelo Anthony’s ‘Dream’ Is For LeBron James To Join Him In New York