Christian Vazquez?s time is coming. Whether it?s this season or in 2015, the 23-year-old catcher figures to be an important part of the Boston Red Sox?s future.

One could make the case the Red Sox should turn to Vazquez soon — if not right now. The defensively gifted backstop is making major offensive strides at Triple-A Pawtucket, and he sounds fully prepared to join Mookie Betts, Jackie Bradley Jr. and other former PawSox teammates in making the big league jump.

?I think that I?m ready. I?d like to play a long time in the big leagues. I want to be there tomorrow. But I don?t have that call,? Vazquez recently told WEEI.com.  ? ? When it?s time, it?s time. I?ll continue to have fun every day and continue to work hard every day. I feel great now at home plate. I was struggling a little bit, trying to do too much at the plate. I?m concentrating now on the middle of the field. I feel better. ? It?s working now. I feel very good and I?ll just continue to do that.?

?Doing less. I was trying to do more in the beginning,? Vazquez told the Providence Journal over the weekend of his offensive improvement. ?I?m more reacting. Don?t think too much. See the ball and hit it. That?s better for me because when I?m thinking too much, things don?t go (my way).?

There?s nothing to suggest the Red Sox will consider making a move to bring up Vazquez in the near future, but the young catcher?s offensive surge should have someone in Boston considering the possibility. Vazquez?s excellent defensive work — highlighted by a rocket arm, quick feet and renowned game-calling — already made him a viable option before the recent stretch.

?He?s been terrific,? PawSox manager Kevin Boles told the Providence Journal. ?It?s amazing what a month (can do). People were talking, a month ago, ?Oh his bat, his bat.? We?ve never had any question about his bat. Really haven?t.?

For now, the Red Sox are letting Pierzynski work through his struggles. David Ross, meanwhile, continues to be an integral veteran for reasons that extend beyond the box score. If the Red Sox ultimately opt for a different path, though, they can do so knowing an impressive minor leaguer is ready to contribute.

?I don?t pay attention and play my game and have fun here. When it?s time, it?s time and they?ll call me up,? Vazquez said. ?Everybody wants that goal.? 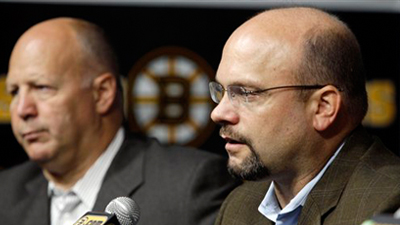 Bruins GM Peter Chiarelli: ‘We’ve Been Looking At A Couple Of Trades’