There are few things more powerful than raw emotion exuded by an athlete thanking a parent after accomplishing something incredible.

We saw Kevin Durant get choked up when he thanked his mother after receiving his NBA MVP award earlier this year.

On Sunday, it was Frank Thomas who had trouble getting through his Hall of Fame induction speech as he fought through tears thanking his father and almost all of his teammates.

The Big Hurt became most emotional when acknowledging his late father.

“We didn?t have much but my parents worked tirelessly for me and my four siblings,” Thomas said. “Frank Sr., I know you?re watching. Without you, I know 100 percent I wouldn?t be here in Cooperstown today. You always preached to me, ‘You can be someone special if you really work at it.’ I took that to heart, Pop. Look at us today.”

Thomas then speed-read through a long list of players that he played with during his 19-year career with the Chicago White Sox, Oakland Athletics and Toronto Blue Jays to make sure he didn’t forget anyone who had an impact him.

Watch the full speech below. 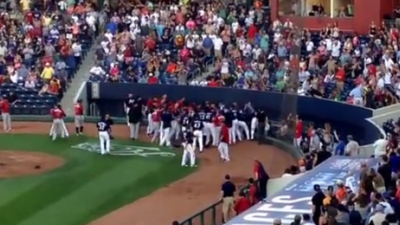