BOSTON — Jon Lester proved why he’s the ace of the Red Sox pitching staff and deserves to be named an All-Star with his performance in Game 1 of Saturday’s doubleheader against the Baltimore Orioles.

The no-decision — Boston earned a walk-off victory in the ninth inning — keeps Lester’s record at 9-7, but his earned run average dropped to 2.73.

“Another outstanding outing for Jon,” Red Sox manager John Farrell said after his team’s victory. “He had very good rhythm and maintained his power. He never really overworked.”

“You give him the ball and get out of the way.”

The Red Sox entered Saturday’s pair of games on a three-game losing streak, and like so many times in the past, Lester lifted his team with a stellar performance against a quality opponent. The Orioles led the AL East Division going into Saturday by a half game over the Toronto Blue Jays, had scored five runs or more in five straight games and were coming off an impressive four-game sweep of the Texas Rangers.

But they were no match for Lester, who used his two-seam fastball and a cutter with lots of movement to silence opposing batters. After a third-inning error by third baseman Xander Bogaerts allowed Baltimore to score two runs and tie the game, Lester kept his composure and allowed just four hits over the next five innings.

Lester has been on top of his game over the last month. He’s 5-1 in his last eight starts, and the Red Sox have won seven of those games. The veteran starter has given up a total of just four earned runs in his last five starts (0.96 ERA).

He’s also been a workhorse for Boston. Lester threw 118 pitches in Saturday’s game, marking the 16th time in 18 starts that he’s reached the century mark. He’s pitched seven or more innings in 11 of his outings and has failed to reach the sixth inning in only one of his last nine starts.

?The bullpen knows coming into my starts that I?€™m going to go seven innings,” Lester said. “I?€™ve always tried priding myself on innings and going deep in every start. I know at times you cant control that, but I am going to go as long as John (Farrell) lets me and see what happens at the end.€”

The Red Sox still have a chance to climb back into the AL East race if they string together some wins heading into the All-Star break. Boston is seven games out of first place, and the two leaders — the Orioles and Blue Jays — are only six games above the .500 mark.

Lester needs to finish the season like a top Cy Young Award candidate for his team to return to the playoffs, and there’s no reason to believe he will fail to perform at that level based on his recent starts. 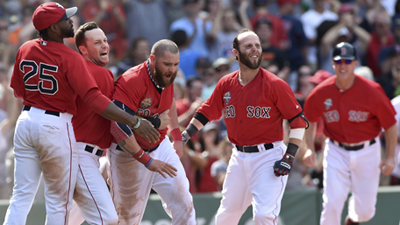