The outfielder, along with Boston Red Sox teammate Jon Lester, was traded Thursday to the Oakland A’s for outfielder Yoenis Cespedes and now will play his games just down the road from his hometown of Petaluma, Calif.

Gomes greatly enjoyed his brief time in Boston, though, a one-and-a-half year stint that included a World Series title and status as a cult hero in New England. He said shortly after news of the deal broke that although he knew a trade was a possibility, he really had no desire to leave.

?I definitely didn?t want to go anywhere,” Gomes told WEEI’s “Middays with MFB.” “I just can?t fathom a baseball player saying he?d ever want to get out of Boston, to tell you the truth. I came here on a whim. I came here when this team finished in last place and I wanted to join this club when it was in last place. Rode a pretty magical wave last year. This year things haven?t gone as well. We were hoping.

?But at the same time, this is the Boston Red Sox, at the end of the day. To be able to toe into that batter?s box where some of the greats have, and just to wear that uniform and at the same time share relationships, hit in the same BP group as David Ortiz and (Mike) Napoli and Dustin Pedroia. Jim Rice and Luis Tiant walking around, all the greats from the pictures up there. That?s the stuff that I don?t take for granted, by any means.?

Gomes certainly doesn’t feel the same way about the city as another former Red Sox outfielder, Carl Crawford, does. The Dodger recently said he thought he would be “stuck” in Boston.

Though Gomes played a key role in the Red Sox’s championship run, the headliner of Thursday’s trade was Lester, who is in the midst of the best season of his career. Lester has been pelted with trade and/or contract questions since spring training, but Gomes said the All-Star has handled his situation like a pro.

?We talked (Thursday) morning. This guy wasn?t throwing pots and pans. This guy was just worried about his next start and asking about the rubber and the clay — like I?d have any idea. But it just shows where his mind is. He?s already looking to get guys out for the A?s.?

After giving his scouting report on Cespedes — “a heck of a game-changer,” he called his former A’s teammate — Gomes offered one final message for Red Sox Nation.

?I know this year hasn?t gone as we?d all like it,” he said. “But please, please, everyone do not forget about that 2013 season — the worst to first, the tragedy of the Boston Marathon, everyone rallying around the city, the finish line, the duck boats, everything, celebrating at home. Might be down a little bit in the win-loss column right now, but do not let that erase any of those memories from last year that I get to wear a ring on my finger for. I?m proud to be a Red Sox for those times.? 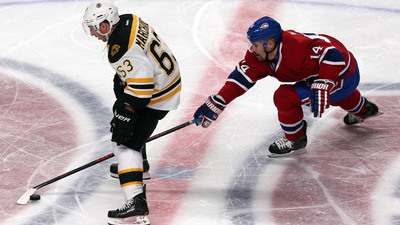