Richard Sherman apparently isn’t the only one who thinks he’s the best corner in the game.

New York Jets corner Dee Milliner didn’t exactly shy away when asked by the New York Daily News who he thought was the best cornerback in the NFL.

“The best corner in the league? Me,” Milliner said. “I ain?t gonna say that somebody else is better than me.”

While Sherman, Darrelle Revis and many other football pundits may disagree with the bold statement coming from a second-year corner who was benched several times last season, Milliner did close out the 2013 campaign on a high note.

He had 27 tackles, three interceptions and 13 passes defended in the last month of the regular season to earn NFL defensive rookie of the month honors for December.

That said, many can agree that Milliner, whose first interception didn’t even come until Week 16, doesn’t have the resume that guys like Sherman or Revis have.

Milliner may have put a little more pressure on himself with those comments, and he must now walk the walk to live up to his bold remarks. 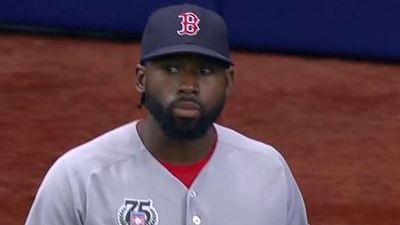 Felix Doubront Open To Trade: ‘Hard To Be Happy’ In Red Sox’s Bullpen