The Boston Red Sox broke up Marcus Stroman’s no-hit bid Thursday afternoon with no outs in the top of the seventh inning. And … that’s about it.

Shane Victorino’s bloop single was the only hit the Red Sox managed against the rookie right-hander — or any Toronto pitcher, for that matter — who tossed seven scoreless innings to lead the Blue Jays to an 8-0 victory at Rogers Centre.

This four-game set in Toronto was supposed to be the Red Sox’s opportunity to inch back into contention in the American League. After demolishing the Blue Jays 14-1 in the series opener to push their winning streak to five games, the Red Sox seemed to be in good position to do just that.

Instead, John Farrell’s club reverted to its pre-All-Star-break form, dropping consecutive games before closing the trip with one of its worst offensive performances of the season.

Stroman completely neutralized the Red Sox in just the ninth start of his young career, scattering two walks and allowing just one runner to reach second base. The Duke product was especially dominant from the final out of the third inning through the end of the fifth, striking out five Red Sox over a seven-batter span.

“Stroman had very good stuff,” Farrell told reporters after the game. “He was able to put the ball on the ground, get a ground-ball double play when he needed to. A couple of different types of breaking balls with a pretty good power slurve, along with a cutter. He showed a lot of poise and a lot of strikes.”

The Red Sox didn’t do themselves any favors against the 23-year-old, though. Victorino’s seventh-inning blooper marked the first time all game that a Boston batter hit the ball out of the infield. Not to mention the fact that Brock Holt, who has been the team’s catalyst atop the order, could do nothing against Stroman, striking out three times for the first time since May 30.

The only real Red Sox rally came in the ninth, when they worked two no-out walks off recently recalled reliever Rob Rasmussen, but that was cut short by a Mike Napoli double play, an injury to David Ortiz and a game-ending flyout with a man on third.

That baserunner — catcher Christian Vazquez — ultimately would not have made much of a difference, as the Red Sox found themselves facing a steep deficit shortly after first pitch. Starter Rubby De La Rosa struggled mightily, allowing the Blue Jays to build a five-run lead after three innings and a 7-0 advantage after five. It was not the showing Farrell was hoping for leading up to what should be an emotionally charged series with the Tampa Bay Rays.

“We were behind the eight ball from the first, second inning,” Farrell said. “We never really were in this one. … A little disappointing given the 10 games stretch that we just completed prior to the All-Star break and coming out of the break, so we’ve got our hands full as we go into Tampa.”

Joe Sacco: ‘It’s An Exciting Time To Be Part Of The Bruins Organization’ 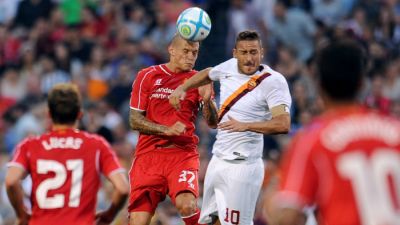