In a literal sense, that would mean Webster is back to square one. From a baseball perspective, particularly when discussing a young starting pitcher dipping his toes in The Show, it?s encouraging.

Webster rebounded from a Daniel Bard-esque meltdown in his last start Saturday against the New York Yankees at Fenway Park to craft a very solid outing Friday against the Los Angeles Angels at Angel Stadium. The 24-year-old — making his third major league start of 2014 — tossed 6 2/3 innings while guiding the Red Sox to a 4-2 win.

“He was much more under control and showed the ability to make adjustments more readily than the last time out,? Red Sox manager John Farrell said. ?I also thought (catcher) Christian (Vazquez) did a great job with him behind the plate. A number of times he would double up on the breaking ball when he’d miss with the first one. The feel by Christian and their work together tonight was so efficient.”

Webster, Boston?s fifth-ranked prospect, has an extremely high ceiling. His big league bugaboo to this point, however, has been his control. The right-hander entered Friday?s contest averaging 6.8 walks per nine innings over 10 major league appearances (nine starts). His last start marked his ugliest yet, as Webster issued six free passes while allowing four earned runs and lasting just 2 2/3 innings.

The command issues didn?t accompany Webster into Friday?s clash with a potent Halos lineup, though. He doled out only two walks while holding Los Angeles to two runs on four hits. The outing marked the first time in Webster?s career that he lasted into the seventh inning.

The mindset was both new and improved. It also could instill more confidence in Webster, who, despite his immense talent, remains a work in progress.

“I think sometimes a pitcher might look upon himself after a game like that and think his world?s apart,? Farrell said Friday regarding Webster?s previous start against the Yankees. ?But you?re a subtle adjustment from getting back into it.”

Webster seemingly made that subtle adjustment. And while he struck out only three hitters Friday, it?s worth noting that the trio was comprised of Mike Trout, Albert Pujols and Howie Kendrick. That?s the best player on the planet, a future Hall of Famer and a former All-Star, for all you scoring at home.

Webster had the benefit of pitching with a lead, as the Red Sox scored three runs in the third inning behind an RBI single from Dustin Pedroia and a two-run double from Yoenis Cespedes. But the bulk of his time on the mound came within a tight contest, as the Angels answered with two runs in the bottom of the third.

There certainly is room for improvement when it comes to Webster, who started his season at Triple-A Pawtucket. It?s hard to argue with Friday?s effort, though, especially when stacked up against last weekend?s disaster. 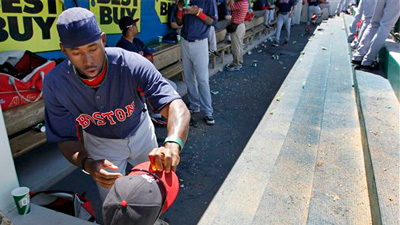