Saying that the Boston Celtics’ 2013-14 season was bad would be an understatement, but there’s reason to believe that the upcoming season could be a little more promising.

While many don’t see the ’14-15 NBA season going that much better for Boston — it’s harder to get worse than 25-57, after all — Bradley gushed about the team’s potential if both him and point guard Rajon Rondo are healthy.

“I can?t even (put it into words), you guys just have to see,” Bradley said Thursday at his youth basketball clinic. “A lot of people might say that, ‘We can?t be this, we can?t be that.’ I feel like with the coach that we have, we can be anything that we want to be. We just have to listen to (head coach Brad Stevens) and buy into what he?s trying to do, his plan for us. I feel like we have a chance to make the playoffs and make a lot of noise this year if we listen to Brad.”

Bradley went on to say that he’s crossed paths with Rondo and forward Jeff Green and that they’re both “fired up” about the upcoming season. And although Bradley hasn’t been able to see rookie guard Marcus Smart for himself, he’s optimistic about what he has heard.

We’ll believe it when we see it, Avery. 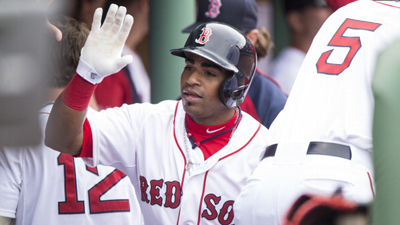