When you get down to it, fantasy football is all about value.

In a perfect “fantasy” world, you’d have the entire NFL at your disposal and could draft the best players at each position to suit your exact needs.

The reality is nine or more other people in your league have a very similar, if not the exact same, draft strategy. Therefore, you need to pay attention not only to who you draft but when you draft them.

Just as there are a handful of players who have distinguished themselves as potential “sleepers,” perhaps there are even more who could fall flat.

It’s important to note that just because a player is on this “avoid” list doesn’t mean he shouldn’t be taken at all. We might advise against taking Rob Gronkowski in the third round, but if he’s still available in the seventh, you’d better grab him.

What follows is a list of 10 players who we believe are either a) overvalued at their position or b) in a prime position to underachieve. If you plan on drafting any of these players, you might want to think twice about your other options.

1. Doug Martin, RB, Tampa Bay Buccaneers (Bye week: 7)
Some are expecting a bounce-back year from the Muscle Hamster this season, but we’re not sold. Vincent Jackson and Mike Evans are two huge red-zone targets, giving new coach Lovie Smith the luxury of limiting Martin’s touches to make sure he stays healthy after an injury-riddled 2013.

2. Eric Decker, WR, New York Jets (11)
Peyton Manning threw for 5,477 yards last season. The entire Jets offense has combined for 5,823 passing yards over the last two seasons. This might be an obvious one, but if you’re expecting anywhere close to 1,288 yards and 11 TDs from Decker (his 2013 stats), you’re sorely mistaken.

3. Knowshown Moreno, RB, Miami Dolphins (5)
See Decker, Eric. Moreno has talent, but going from the most prolific offense in NFL history to a potential backup role to Lamar Miller should result in a sharp drop-off from his gaudy 2013 stats.

4. Trent Richardson, RB, Indianapolis Colts (10)
This is less a knock on Richardson and more that we just don’t trust any Colts running back. Indy was in the bottom 20 in rushing attempts in 2012 and 2013, and Andrew Luck scored nearly a third of the Colts’ rushing touchdowns last season. The opportunities just aren’t there.

5. Russell Wilson, QB, Seattle Seahawks (4)
Wilson is one of the best young quarterbacks in the game — just not when it comes to fantasy football. The Seahawks have a ground-and-pound, possession-control offense, which limits Wilson’s upside as a fantasy starter. He’ll still put up solid numbers, but there will be better options.

6. Toby Gerhart, RB, Jacksonville Jaguars (11)
A lot of people are high on Gerhart, the new featured back in Jacksonville. The problem? He plays in Jacksonville. If the Jaguars are half as bad as they were in 2013, they’ll be forced to throw the ball a ton. That spells fewer fantasy points for Toby.

7. Hakeem Nicks, WR, Colts (10)
11, 7, 3, 0. That’s Nicks’ TD totals in his last four seasons with the New York Giants. A new offense should help, but Andrew Luck has too many other weapons (T.Y Hilton, Reggie Wayne) at his disposal to make Nicks a legitimate fantasy threat.

8. DeSean Jackson, WR, Washington Redskins (10)
Jackson very easily could make us eat our words, but a shift from the pass-happy Eagles to a team that had the fifth-most rushing yards in the NFL last season is cause for some concern. His success also hinges partly on Robert Griffin III’s health, which never is a sure thing.

9. Rob Gronkowski, TE, New England Patriots (10)
Sorry, Gronk, we just can’t trust you. He’s a fantasy stud when healthy, and that means someone probably will take him in the second or third round. That’s too valuable a pick to allot to a guy who has yet to prove he can stay healthy.

10. C.J. Spiller, RB, Buffalo Bills (9)
Spiller is one of the most frustrating players in fantasy football, capable of both huge breakout games and complete duds. The Bills added Bryce Brown in the offseason, meaning him and Fred Jackson could cause even more frustration for Spiller owners in 2014. 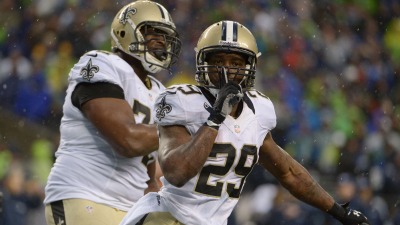 Fantasy Football 2014 Preview: Top 10 Sleepers Who Can Help Your Team