Hulk Hogan: I Broke Up My Daughter's Engagement To Ex-Cowboys Center - NESN.com Skip to content Hulk Hogan isn’t messing around these days, even when it comes to his daughter’s love life.

Costa and Brooke split up in November after getting engaged in June, as the WWE legend’s daughter said she wanted to focus on her music career.

As Hulk Hogan told 105.3 The Fan, though, music might have not been the real reason for the breakup.

“I love the Dallas Cowboys, been a fan forever,” Hogan said. “But my daughter was engaged to one of those guys and he didn’t walk the walk and talk the talk. I put a bullet in that really quick. There was no way my daughter was going to marry somebody that I don’t like, that got me mad or has got in my face.”

This begs the question: who would dare get in Hulk Hogan’s face?

“There was a little run in with only one of the Cowboys,” Hogan said. “But you know what, he knew better than to step up, ’cause he would have gotten slammed just like Andre the Giant.”

Costa retired from football in April of 2013, saying that the game took too much of a toll on his body. He should consider himself lucky, though, because “getting slammed just like Andre The the Giant” doesn’t sound very pleasant, either.

Meanwhile, Brooke has apparently moved on, as well. She was seen with her new boyfriend at the Floyd Mayweather Jr.-Marcos Maidana fight on May 3, as he took her for an early 26th birthday gift.

The lesson to be learned from this whole situation is that Hulk Hogan always gets his way, and you never “step up” to him.

h/t For the Win 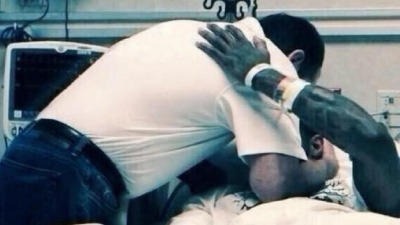