College football is back, and no one is happier about that than Jameis Winston.

The 2013 Heisman Trophy winner had a long offseason, coming under heavy scrutiny for, among other things, stealing crab legs from a supermarket.

Winston was back in his element Saturday, though, and it’s hard to criticize his performance as he led top-ranked Florida State to a 37-31 win over Oklahoma State.

In addition to throwing for 370 yards and one touchdown, the versatile quarterback treated fans to a fantastic 28-yard TD scramble in the third quarter.

The best part of Winston’s scamper — the longest rushing touchdown of his career — has to be the hurdle over his own lineman, followed by a lethal sidestep of a helpless Cowboys defender.

Kudos also should go to Winston’s lineman, who was about to get up before realizing that, yes, his quarterback was going to hurdle right over him.

Winston did throw two interceptions, but plays like this make the 20-year-old quarterback the most exciting player in college football. 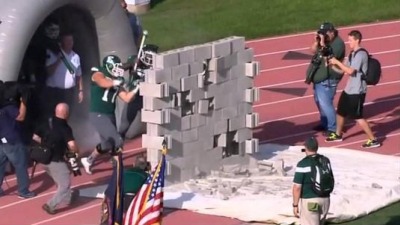