Millar said Friday on WEEI?s ?Middays with MFB? that players shouldn?t be kept out of the Baseball Hall of Fame because of certain suspicions. According to Millar, one?s contributions to the game should be the paramount consideration.

?I think the Hall of Fame is a museum,? Millar said. ?At the end of the day, I want to take my kids to a museum and show them (Barry Bonds) and Clemens and (Sammy Sosa) and (Mark McGwire).

??Who knows?? is the ultimate question. We can assume, but at the end of the day, nobody knows, and it?s one of those places where we?re trying to say, ?Who morally did right?? There?s guys in there that drank alcohol, that did other things that are in the Hall of Fame. I don?t know.?

Millar certainly isn?t alone in his philosophy. The only opinions that really matter, however, are those of the Hall of Fame voters. And if the last two years — the first two years Clemens and Bonds appeared on the ballot — are any indication, players who thrived during the Steroid Era face an uphill climb in their quest for enshrinement.

One of Millar?s former teammates, Manny Ramirez, is among those the former Red Sox first baseman and current MLB analyst would like to see in the Hall of Fame. For Millar, again, it all boils down to on-field production.

?Like Pete Rose, why isn?t he in the Hall of Fame? I get that he gambled on baseball and made a bad decision, made a bad choice, but he?s the all-time hits leader,? Millar said. ?I want to take my kid and show him Pete Rose. Manny Ramirez, I?m sorry, I didn?t say he was normal, I didn?t say he?s not bipolar at times and doesn?t want to be traded at every second. At the end of the day he hit 40 (home runs) and drove in 130 (runs). He made the game look easy. The best right-handed hitter I?ve ever been around. So yeah, he?s in the Hall of Fame.?

Millar isn?t destined for Cooperstown anytime soon. But he can dish out some Hall of Fame caliber sports takes. 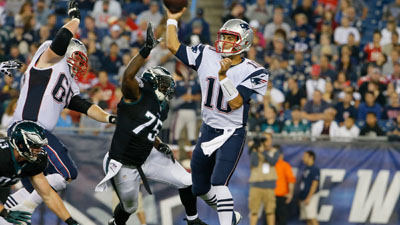 Jim Brown: I Like Johnny Manziel’s Type, ‘Nothing Wrong With’ Partying