BOSTON — It’s hard not to be biased when it comes to Mike Trout.

Maybe someone could watch a player grow up, from a 13-year-old dominating his hometown youth leagues to the best major leaguer on the planet, and maintain a level of detachment. But not in this case. Not with Trout, a player who was surrounded with a family and support system that assured that if he made it big, it would be by doing it the right way.

There are oodles of memories I have from covering Trout at Millville High School, where he shattered the New Jersey state record for home runs, was once walked in a state playoff game with the bases loaded and inspired every creative (though not always sportsmanlike) finagling of the rulebook by opposing coaches to try to contend with his incredible speed, amazing power and devastating curveball.

The funny thing is, most of those memories don’t come from games. Every professional athlete was a stud as a kid; the 12th man on the Maine Red Claws surely has a story about the time he dropped 50 points in a high school game. With Trout, it wasn’t what he did, but how he did it.

From the very beginning, to put it concisely, he “got” it. Prior to Trout’s senior season at Millville, coach Roy Hallenbeck scheduled a scrimmage against one of the region’s Catholic powerhouses, which also boasted a player on scouts’ radar. The intent was to showcase both players in a one-stop setting. The other player, whose identity isn’t relevant here, agreed to only a certain number of swings, and a very limited number with a wooden bat. When Trout stepped into the box and began raking away with metal, then wood, smoking ropes all over the outfield, it was evident that not all pro prospects are created equal — in body or in spirit.

Still, certain common knowledge dictated that this was a mistake. Throughout Trout’s development, I occasionally heard that the Trouts were doing it “wrong.” His father, Jeff Trout, was a tremendous player at the University of Delaware and reached Double-A in the Minnesota Twins system, but some people told me Jeff was making a mistake keeping his son at Millville High instead of transferring to one of the nearby non-publics. Whereas most prospects of Trout’s stature would have quit everything but baseball as a senior, Trout served as a co-captain on a surprisingly gutsy Thunderbolts boys’ basketball team because he loved to play and it helped him stay in shape, common knowledge be damned.

When scouts visited and asked to see Trout hit, he hit. When they asked to see him run, he ran. It was a refreshingly unique approach, given how young players are virtually hidden nowadays. NFL and NBA prospects skipping workouts is such a common occurrence, it barely qualifies as news. The folks managing those players worry about exposing a player’s weaknesses. Trout worried only about showcasing his strengths.

After Trout was drafted in the first round by the Los Angeles Angels of Anaheim in 2009 — challenging yet another prevailing prejudice against players from the colder, less talent-rich Northeast — I flirted with writing a book about his upbringing. He wasn’t Mike Trout, MLB All-Star, then, just a kid whose backstory needed to be told.

I did a few interviews: his coaches, his dad’s former coach, a few of his teammates. Then a crazy thing happened; he started to become the best player in baseball. There were a couple of awkward conversations with his agent, who was concerned I was trying to piggyback on Trout’s fame — a fame that was nonexistent when I started the project. I understood. An agent’s responsibility is to protect his client. But in trying to write a story about everything that was great about sports, I realized I looked like just another mooch trying to cash in.

So, I stopped. Maybe some day, when Trout is no longer a phenom with his brightest future still ahead of him, I’ll grab a beer with him and Jeff, and start again. There’s plenty of time. Unlike a lot of Golden Boys, Trout doesn’t carry the air of someone who will eventually fall from grace. Not when you’ve seen where he came from, and you’re so certain he’ll continue to go far. 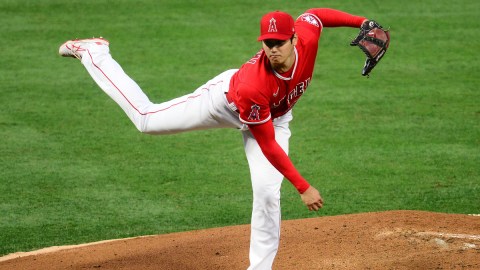