BROOKLYN, Mich. — NASCAR added a rule Friday ordering drivers to not approach the track or moving cars after accidents. The announcement comes less than a week after a driver was struck and killed during a dirt-track race in New York.

If a car is involved in an accident and can no longer keep going — and no extenuating circumstances exist such as smoke in the cockpit or fire — the driver should not loosen any personal safety equipment until directed to do so by safety personnel or a NASCAR or track official.

After being told to exit the car, the driver should proceed to an emergency vehicle or as otherwise directed.

“Really, we’re formalizing rules that have been there,” Robin Pemberton, NASCAR’s vice president of competition and racing development, said at Michigan International Speedway. “It’s reminders that take place during drivers meetings with drivers about on-track accidents. We’re just formalizing this and it’s something that we worked on this week.”

The rule takes effect immediately and applies to all of NASCAR’s series. Violations will be addressed on a case-by-case basis.

NASCAR star Tony Stewart is skipping this weekend’s Sprint Cup race at MIS. Last Saturday, Stewart’s car hit and killed Kevin Ward Jr. at a sprint car event in Canandaigua, New York. After Stewart appeared to clip Ward’s car, sending it spinning, Ward left the car during the caution period, walked down the track and was hit by Stewart.

“Through time you have to recognize when you get a reminder or tap on the shoulder, something that may need to be addressed,” Pemberton said. “This is one of those times where we look outside our sport and we look at other things, and we feel like it was time to address this.” 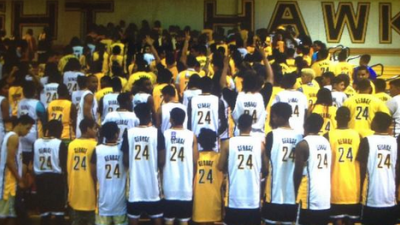 Paul George Buys Old No. 24 Jerseys, Gives Them To His High School (Photos) 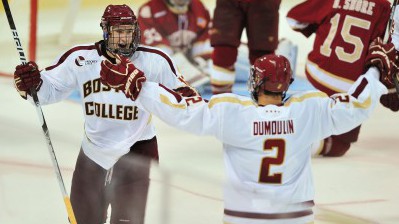 Report: Bruins Among NHL Teams ‘In The Mix’ For BC Star Kevin Hayes