Ryan Mallett runs out the clock with one final kneel-down, and the Patriots leave Gillette Stadium with their first win of the preseason.

Fourth quarter, 2:00, Patriots 42-35: We have reached the two-minute warning, and it looks like the Patriots plan to spend the rest of this game in victory formation.

Fourth quarter, 4:39, Patriots 42-35: Matt Barkley drove the Eagles down inside the Patriots’ 1-yard line, but wideout Damaris Johnson could not punch it in.

Yes, you read that right. Johnson, who normally lines up on the outside, took the handoff from behind Barkley on seven consecutive plays, plowing up the middle for gains of five and four yards before stalling out at the goal line.

Barkley connected with Trey Burton for 18 yards and Johnson for 21 yards on the first two plays of the drive, and the Eagles were assisted by — you guessed it — two more defensive penalties.

Ryan Mallett and the Patriots will take over in the shadow of their own end zone.

Fourth quarter, 8:34, Patriots 42-35: Ryan Mallett had another impressive drive for the Patriots. He’s been as good, and probably better than Garoppolo in this game.

Running back Roy Finch continues to impress. He was in over his head in the preseason opener against the Redskins, but he’s looking much more confident in his second game.

Mallett’s best throw of the drive came on a deep pass to Brian Tyms in the end zone down the right sideline. Tyms couldn’t haul it in and looked frustrated with himself.

End third quarter, Patriots 42-35: The Patriots’ backup defenders continue to struggle, just as the flags continue to fly. I think we’ve seen more “illegal hands to the face” penalties called tonight than in entire history of the NFL combined.

The Eagles scored on a dump off from Barkley to Henry Josey, and defensive tackle Marcus Forston was completely turned around as he tried to make the play down the field. It was an ugly play for the Patriots, but at least a flag wasn’t thrown.

Third quarter, 2:48, Patriots 42-28: The Patriots also didn’t have the ball for very long. Ryan Mallett couldn’t hit Brian Tyms deep, and he got sacked on third down to end the drive.

Third quarter, 4:22, Patriots 42-28: It didn’t take long for the Patriots to get the ball back. Linebacker Chris White deflected a deep pass from Matt Barkley, and safety Nate Ebner hauled in the attempt.

The Patriots have the ball on their own 44-yard line.

Third quarter, 5:15, Patriots 42-28: Wide receiver Brian Tyms has been slightly inconsistent, but when he’s on, he’s great. Tyms showed nice leaping ability and field awareness by hauling in a Ryan Mallett touchdown in the back of the end zone.

On the previous play, running back Jonas Gray ripped off a long touchdown run, but it was negated by a block in the back.

Third quarter, 6:13, Patriots 35-28: Cornerback Malcolm Butler is showing whey he started across from Darrelle Revis. The undrafted rookie cornerback ripped the ball out of Jeff Maehl’s hands after an eight-yard reception, then Butler recovered the loose ball.

It’s interesting to see Butler starting over Browner, Ryan and Arrington, but he’s proving that he deserves the opportunity.

Third quarter, 6:23, Patriots 35-28: Rookie running back Roy Finch already is having a much better game that he did in the Patriots’ preseason opener, when he fumbled a kickoff and muffed a punt return.

Finch caught a screen pass, then took a handoff from Mallett for a 10-yard touchdown run. Wide receiver Josh Boyce also had a nice drive, with an end-around and reception on an impressive throw from Mallett.

Third quarter, 9:36, 28-28: The Patriots’ backup defense has struggled mightily, and their linebacker unit of Steve Beauharnais, Chris White, Michael Buchanan and Darius Fleming weren’t helping much. Beauharnais was caught out of positive and White allowed a touchdown reception in coverage after slipping on the turf.

Sanchez recovered well after throwing a pick to Harmon. Harmon and Ryan remained at safety for the Patriots’ second defensive drive.

Duron Harmon read Sanchez’s pass beautifully, and the safety brought it back all the way to the Eagles’ 12-yard line.

Ryan Mallett is in the game for the Patriots, and he just scrambled for a touchdown. He completed a pass to McCuller earlier in the drive.

End half, 21-21: After an hour and 51 minutes, the first half is finally over. The Patriots couldn’t move the ball on their final drive, and they punted away.

The Patriots’ first-team offense looked great, save for Brady’s interception to Williams, which can be blamed on Maneri, who appeared to run the wrong route.

The first-team defense made some great stands, as well. Edge defender Rob Ninkovich recorded a six-yard sack and made a nice play against the run on second down.

Jimmy Garoppolo strung together two fantastic drives, but the Patriots’ offense was stalled on his final three chances.

Second quarter, 2:00, Patriots 21-21: The Eagles, with Mark Sanchez at the helm, were able to move the ball well on the Patriots’ second-team defense, which featured Logan Ryan playing safety. On the final play, Sanchez connected with Momah in the end zone. Momah hit the ground, the ball flew up and into the waiting arms of fellow Eagles receiver Arrelious Benn. The play was reviewed and stood.

Second quarter, 2:00, Patriots 21-14: This half is almost — mercifully — over. There have been an insane amount of flags. It feels like there’s a flag thrown on every play. The Patriots got backed up in their own end zone thanks to penalties on Marcus Cannon on consecutive plays.

Second quarter, 3:35, Patriots 21-14: After a nice pass breakup on the last drive, Chung gave up a long reception to tight end Brent Celek, then the touchdown to tight end Zach Ertz.

Darrelle Revis was replaced by Brandon Browner on that drive, while the Patriots keep rotating at safety. Duron Harmon got his first action of the day at that position with Devin McCourty out.

Second quarter, 5:20, Patriots 21-7: The Jimmy G magic ran out on his third drive of the game. He had a pass batted down at the line on first down, and the Patriots went three-and-out.

Punter Ryan Allen’s punt was blocked and the defense will be tested as the Eagles have fantastic field position.

Second quarter, 6:12, Patriots 21-7: The Eagles managed to move down the field, but Alex Henery’s field goal was no good.

Patriots defensive lineman Joe Vellano nearly came up with a sick, but Foles was able to throw the ball away in time. Cornerback Malcolm Butler looked good in coverage on a pass to 6-foot-7 Ifeanyi Momah. Safety Patrick Chung made a nice pass breakup, and Kyle Arrington had a solid stop in the run game.

Garoppolo hooked up with Brandon LaFell for the touchdown. He also hit LaFell on a deep third-and-8 completion earlier in the drive. Garoppolo has tremendous poise for a second-round rookie out of an FCS school.

Stevan Ridley was called for fumbling — recovered by James Develin — on that drive, but on the replay, it looked like his knee was down. He didn’t re-enter the field for the Patriots.

Arrington played safety for a second straight drive. In nickel, he moved down to slot cornerback and Patrick Chung played safety.

First quarter, 2:39, Patriots 14-7: The Patriots now lead the Eagles off a nice series from rookie QB Garoppolo. He connected with fullback/tight end James Develin twice, with their second hook-up resulting in a touchdown.

It should be noted that there is a penalty flag on nearly every play. It’s making this preseason game tough to watch.

First quarter, 5:01, 7-7: The Eagles turned the ball over on their first offensive play. Cornerback Malcolm Butler and linebacker Dont’a Hightower combined for the strip and defensive tackle Tommy Kelly wound up with the football.

Darrelle Revis started at cornerback along with Butler. Kyle Arrington got the start at safety.

Jimmy Garoppolo is in the game at QB for the Patriots now.

First quarter, 5:09, 7-7: The Patriots faired much better on their second offensive drive, despite some continued poor play by the offensive line.

Eagles cornerback Curtis Marsh was called for pass interference on a long pass from Brady to Edelman down the left sideline. It looked like Edelman hauled in the catch, though the officials ruled it incomplete. Bill Belichick argued the call and got flagged for unsportsmanlike conduct.

Brady connected with Thompkins for a back-shoulder fade touchdown.

Rookie running back James White is showing some slight hesitation on offense so far.

First quarter, 10:41, Eagles 7-0: The Patriots’ first offensive drive was going swimmingly until Brady targeted his lone tight end, Steve Maneri. Brady expected Maneri to run a curl, and instead, the former offensive lineman kept running. The ball wound up in the arms of cornerback Cary Williams, who brought it back 77 yards for a touchdown. Williams famously called the Patriots cheaters last week.

Williams hurt his hamstring on the play and will not return.

Brady was on the same page with receivers Danny Amendola, Julian Edelman and Kenbrell Thompkins on that drive. Running back Stevan Ridley looked great, running for 24 yards on three carries.

First quarter, 15:00: The Patriots won the toss and chose to receive.

7:24 p.m.: We’re just moments away from kickoff now. Keep an eye on wide receiver Brandon LaFell when Brady is on the field. The two have been working together well during practice, and a strong game could increase the QB’s confidence in his new receiver.

Offensive tackle Nate Solder is in uniform despite leaving Thursday’s walkthrough early with a trainer.

4:30 p.m. ET: We’re three hours from kickoff, but NESN.com already is set up in the Gillette Stadium press box, ready to take in the New England Patriots’ second preseason game of the 2014 season.

The Patriots’ preseason home opener comes against the Philadelphia Eagles, who have been in Foxboro, Mass., to practice with New England since Tuesday. The teams have appeared to get along just fine all week, avoiding any Dallas Cowboys-Oakland Raiders-level fights.

Patriots starting quarterback Tom Brady should see his first game action of the 2014 preseason. He sat out the Patriots’ summer opener against the Washington Redskins last Thursday. Patriots fans should get their first look at cornerback Darrelle Revis on the Gillette Stadium field, as well.

My eyes will be locked on cornerback Brandon Browner, for as long as he’s on the field. NFL officials have been instructed to crack down on illegal contact penalties. Browner has been known to remain physical with wide receivers well past the five-yard buffer zone, where contact is allowed.

Wide receiver Brandon LaFell, running back James White and linebacker Darius Fleming also are players to keep an eye on during Friday night’s game against the Eagles. Brady and LaFell have appeared to build a rapport in practice. It will be interesting to see if that carries onto the game field.

Stay here for updates from Gillette Stadium throughout the evening. Players will start coming onto the field in about an hour. 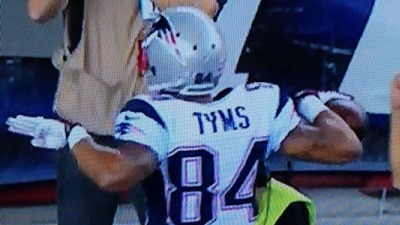 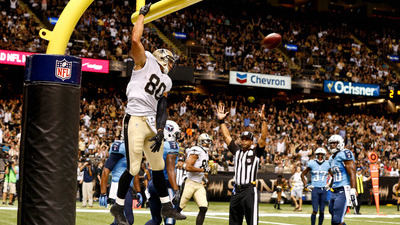