It seems like the Cleveland Browns are jumping on the Johnny Manziel bandwagon after his solid preseason debut.

There’s yet to be an official announcement, but ESPN’s Bob Holtzman reports that a team source told him that Manziel is ahead of Brian Hoyer in the competition for Cleveland’s starting quarterback job.

Manziel led the Browns with 27 rushing yards and completed seven of 11 passes in the team’s preseason loss against the Detroit Lions on Saturday. Meanwhile, Hoyer completed six of 14 passes. Neither quarterback threw a touchdown.

The Browns haven’t named a starter for their second preseason game against the Washington Redskins next week, but it sounds like Johnny Football will get the starting nod against Washington.

Although Manziel didn’t exactly wow anyone with his performance against the Lions, he looked composed and didn’t seem flustered playing in an NFL environment. 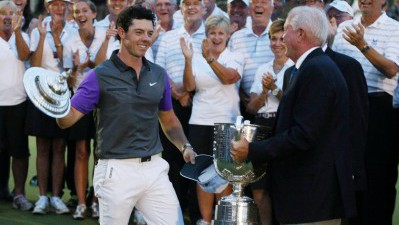