Logan Mankins no longer is a New England Patriot, and apparently quite a few people are unhappy about that.

Several of Mankins’ former Patriots teammates were “pissed” after the team traded its captain to the Tampa Bay Buccaneers on Tuesday, Ben Volin of The Boston Globe reported, citing a league source. Whereas Darrelle Revis described the mood at practice as “a little down,” a few unnamed Patriots used a much stronger word.

“A league source connected to several Patriots players used the ‘p’ word that rhymes with ‘missed’ to describe the mood in the locker room Tuesday,” Volin wrote Wednesday. “Many players still felt that Mankins was the best lineman on the team, the source said.”

Publicly, the Patriots were highly complimentary of Mankins after announcing the trade. Head coach Bill Belichick called Mankins the best guard he ever coached, and multiple players gushed about him as a teammate and friend after learning the news.

Sentimentality did not prevent the Patriots from making what they believed was a better football decision, however. A report Wednesday indicated the team had asked Mankins to take a pay cut before dealing him. By declining, he presumably made the team’s decision to trade him that much easier. 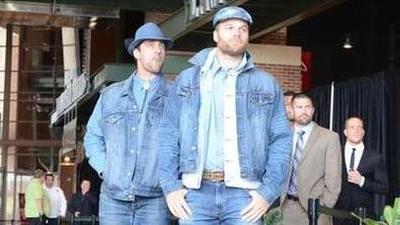