The New York Rangers made a surprise run to the 2014 Stanley Cup Final last season, where they lost in five games to the Los Angeles Kings.

The Blueshirts were fortunate that the Montreal Canadiens defeated the Presidents’ Trophy-winning Boston Bruins in Round 2, and were even luckier in the Eastern Conference final when Habs goaltender Carey Price suffered an injury in Game 1 and didn’t play for the rest of the series.

A return trip to the Cup Final is unlikely, primarily because of the players who departed in free agency. Defenseman Anton Stralman was an important and underrated part of New York’s blue line. He’s a shutdown defenseman who contributed to special teams and provided valuable scoring depth. Benoit Pouliot was an excellent depth forward and a driver of puck possession. Brian Boyle added toughness, size and penalty killing to the bottom-six.

Player to Watch
Rick Nash has been a major disappointment for the Rangers during postseason play. He’s scored just four goals in 37 playoff games over the last two years, and this lack of consistent offensive production puts more pressure on No. 1 goaltender Henrik Lundqvist to be near-perfect each night.

Nash was good, not great in the 2013-14 regular season — finished with 39 points (26 goals, 13 assists) in 65 games. The Rangers gave up a lot of assets to acquire Nash from the Columbus Blue Jackets in 2013, and he must perform at the level expected of a first-line forward making over $7 million per season if New York is going to win a few playoff rounds.

Biggest Strength
Goaltending has been the strength of the Rangers for the last nine years. Lundqvist has won 30-plus games in each of the last eight non-lockout seasons, and has posted a career .920 save percentage and a 2.26 goals against average. His regular-season numbers were OK in 2013-14, but he improved mightily in the playoffs with a .927 save percentage and a 2.14 GAA.

Lundqvist is an elite talent, but he’s also durable. The 32-year-old veteran consistently plays over 60 games each season, and has started 70 or more games four times.

Lundqvist cleans up a lot of the Rangers’ mistakes and gives his team a chance to win nearly every game. He’s the definition of a team MVP.

Most Glaring Weakness
Derek Stepan’s injury — he’s out 4-6 weeks — has left the Rangers really thin at center. Derick Brassard might be forced to play on the top line, but he’s best suited as a second or third line center.  After that, Dominic Moore and J.T. Miller are the two-best center options, and neither player is a top-six caliber scorer. New York could experiment with Kevin Hayes at center, but the newly signed rookie from Boston College is a natural winger.

Depth down the middle could be a problem for New York while Stepan is injured, and it might even be an issue when he returns. The loss of veteran center Brad Richards will be felt early in the season.

Expectations In 2014-15
The Rangers, like usual, will go as far as Lundqvist takes them. He’s one of the best goalies in the world and capable of taking a team on a deep playoff run almost by himself. New York will be a playoff team in 2014-15, but securing one of the three playoff berths from the Metropolitan Division is far from a guarantee. The most likely finish for the Rangers is a first or second-round exit from the postseason. 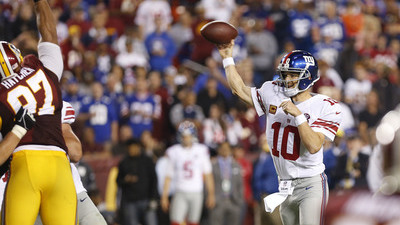 Eli Manning To Geno Smith: If Fans Yell At You, You Probably Deserve It