The Vancouver Canucks went through a disastrous 2013-14 campaign that saw them finish 12th in the Western Conference standings, which snapped the team’s postseason appearance streak at five seasons.

As a result of the poor finish, Vancouver fired head coach John Tortorella and general manager Mike Gillis, and replaced them with Willie Desjardins and Jim Benning, respectively.

The team made a lot of roster moves, too. Former Selke Trophy-winning center Ryan Kesler didn’t want to be in Vancouver anymore, so the team traded him to the Anaheim Ducks for a package of players and a draft pick. The trade gave the Canucks some much-needed depth, but do they have enough talent to return to the postseason from a loaded Pacific Division?

Player to Watch
Ryan Miller has reunited with Benning, the man who drafted him in Buffalo. The veteran goaltender played well for the Sabres last season before being dealt to the St. Louis Blues at the trade deadline. Miller was expected to be the missing piece in St. Louis’ championship puzzle, but he struggled toward the end of the regular season and failed in the first round of the playoffs with an .870 save percentage and a 2.70 goals against average.

Despite his mediocre career postseason stats, Miller is a huge upgrade in net for Vancouver because he’s been a consistent regular-season performer. He’s won 25-plus games in all eight of his non-lockout seasons as an NHL player, and he’s posted 30 or more wins seven times.

Miller must play at a high level for the Canucks to reach the playoffs because this team doesn’t have the same scoring depth that many of their conference rivals possess.

Biggest Strength
The Canucks have a talented blue line that features four quality players capable of excelling against top competition for at least 18 minutes per game. Dan Hamhuis and Chris Tanev likely will make up the first pairing, with veterans Kevin Bieksa and Alexander Edler expected to be the second-pairing duo.

One of the strengths of this blue line is its offensive talent. Edler is a fantastic puck-mover and a good power-play quarterback, and Bieksa and Tanev possess a powerful shot from the point. A well-rounded defensive corps is a requirement to make the playoffs in the West, and the Canucks have two very good pairings to use late in games.

Most Glaring Weakness
The lack of a legitimate second-line center could be a problem. Bonino is the likely choice for that role, but a good portion of his 49 points from last season can be attributed to playing on a Ducks team that ranked No. 1 in goals scored. He won’t have the same level of offensive talent around him in Vancouver, and he also will face better opponents as a top-six player and not a third-line center. Linden Vey is the next-best choice for the second-line center spot, but he has only 18 games of NHL experience and tallied just five points for the L.A. Kings in 2013-14. Depth down the middle is extremely important to making the playoffs, and Vancouver has very little of it heading into the season.

Expectations In 2014-15
The Canucks are free of Tortorella’s defense-first system, which should free up talented forwards such as Henrik and Daniel Sedin to be more creative offensively and score more goals. Vancouver made some nice offseason forward additions in signing first-line right winger Radim Vrbata and acquiring underrated center Nick Bonino in the Kesler trade. These moves should help the Canucks avoid ranking 28th in goals scored in back-to-back seasons.

There’s no question this team will be better than last year, but we won’t see enough improvement for the Canucks to earn a playoff spot ahead of more talented, deeper opponents such as the Dallas Stars, Minnesota Wild and Nashville Predators. A wild-card spot is the best Vancouver can hope for because the three automatic playoff berths from the Pacific almost certainly will be claimed by the three California teams.

Domestic Violence Experts To Serve As Advisers To NFL 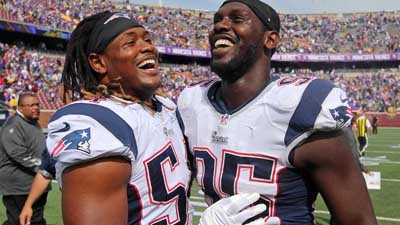