Defenseman Torey Krug and forward Reilly Smith, both of whom were unsigned as restricted free agents over the summer and missed the first two weeks of camp, joined their teammates on the ice for the first time since the 2014 Stanley Cup playoffs.

“At times, you think you’re fighting a three-way battle,” Smith said. “You’ve got your own ideas, your agent’s advising how he probably should, and they’ve been in the business a long time and that’s probably the advice you should take. The Bruins also have their ideas and ideologies of how they want the whole situation to go. You’re kind of bouncing ideas off of everyone.

“Me and Torey were kind of bouncing ideas off each other the whole time, we just wanted to get to camp, but it seems like it all worked out.”

Krug and Smith signed matching one-year, $1.4 million contracts, ensuring they will be back in time for the regular-season opener on Oct. 8.

“I think at some point you just got to get in here and make sure you’re prepared for the upcoming season, it got to be that time,” Krug said. “We talked to (Bruins GM Peter Chiarelli) a lot over the last few days and we decided to come to the deal that we reached. We’re very happy to be here. I was very excited to walk in the room and see all the guys, and be back in this great city. I’m very happy with the way things worked out.”

Smith skated with forwards prospects Ryan Spooner and David Pastrnak for most of Monday’s practice. Krug was paired with Chris Breen during the majority of drills.

Bruins general manager Peter Chiarelli said the current plan is for neither player to participate in Tuesday’s home preseason game against the New York Islanders. It’s more likely Krug and Smith will see their first game action in Friday’s matchup against the Islanders and/or Saturday’s contest versus the Detroit Red Wings.

— Lines and most-used pairings from drills:

— Bruins forward David Pastrnak skated with the team for the second straight day. He did participate in drills and battled for puck possession a few times, but neither Julien nor Chiarelli mentioned the 2014 first-round pick being cleared for contact. He wasn’t cleared to take contact at Sunday’s practice.

— Chiarelli said Jordan Caron and Matt Fraser have had good training camps among the forwards.

“From a defensemen perspective, I like what we’ve seeing from Adam (McQuaid) coming back. He’s played well. I bring up him because he’s been out of the mix, now he’s back in the mix just because he had been injured. I know guys want to stay here. I like what I’ve seen competition-wise (in camp).”

— Even though Krug and Smith signed for a lower salary than some expected, the Bruins need to work on their cap situation a little bit more. “There’s still housekeeping to do from a numbers perspective,” Chiarelli said.

It’s possible the Bruins could make a trade before or during the season to create more cap space.

“There’s been normal stuff that you’d expect in the first half of camp,” Chiarelli said when asked about trade chatter. “Our players are good players, they’ve had success and I’d hate to move any of them.”

— Chiarelli said the Bruins have released veteran winger Ville Leino from camp. He had been with the B’s on a tryout deal.

Defenseman Chris Breen also was released from camp. He will join the Providence Bruins’ training camp.

— Krug admitted he’s not in optimal shape, but he did work out frequently with Smith while their agents negotiated with the Bruins.

“Me and (Smith), we’re going to work hard to get back where we were and it shouldn’t take long,” Krug said. “We’ve been skating every single day. It’s not like we were off the ice or anything. We worked hard, so we’re just happy to be back.”

— “No I don’t think so,” Krug said when asked if he thought the regular season could start with him not signed. “I was very confident that we’d get something done.”

— Smith admitted it was difficult not to be at camp when just about all of his Bruins teammates were skating.

“Everyone being here and not being able to be part of that, it’s a tough thing. Days are really long, I’ll tell you that for sure,” Smith said. “It seemed like every 20 minutes I was looking at my phone, and every 20 minutes I was checking to see if there were any new messages and anything going forward in the negotiations.” 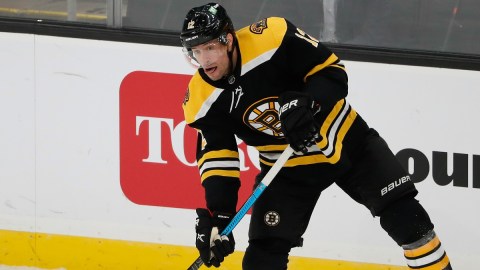 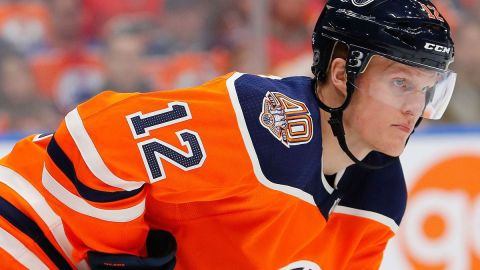