The most recent memory of David Krejci is him struggling to score in the 2014 Stanley Cup playoffs.

He failed to find the back of the net and tallied just four assists in 12 playoffs games, as the Boston Bruins fell to the rival Montreal Canadiens in the second round.

Despite that disappointment, signing Krejci to a six-year contract extension worth $43.5 million is good business by the Bruins’ front office. (The deal was reported Wednesday, but the team hasn’t made an official announcement.)

The 28-year-old center, who’s entering the final season of the three-year, $15.75 million contract he signed in 2011, could have become an unrestricted free agent at the end of this season.

Let’s examine a few reasons why re-signing Krejci is a smart move.

First-Line Centers Are Hard To Find
It’s true: Just ask the Toronto Maple Leafs, who’ve been searching for a No. 1 center for the last decade-plus.

Championship teams are built down the middle. Look at the moves made in the trade/free-agent markets this offseason. Teams spent millions of dollars and gave up valuable trade assets to acquire top-six centers such as Ryan Kesler, Jason Spezza and Paul Stastny.

Krejci has averaged 0.78 points per game, or 64 points, over the last six seasons. His 69 points (19 goals, 50 assists) in 80 games led the Bruins in scoring last season and was four fewer than his career high. He played against tough competition, too, as evidenced by his 29.5 QoC rating at 5-on-5 (tied for second-highest on team).

Krejci also is a durable player. He’s never missed more than seven games in a full season — and missed just six regular-season games over the last three campaigns combined — while consistently averaging close to 20 minutes of ice time per game.

Replacing Krejci wouldn’t have been easy. Carl Soderberg played well last season, but he’s not a top-six center yet. Neither are prospects Ryan Spooner and Alex Khokhlachev at this stage of their development. The Bruins are in win-now mode and need players of Krejci and Patrice Bergeron’s caliber on the top two lines. Doing that is expensive, but getting those two players signed long term for a combined salary-cap hit of $13.75 million is excellent. Jonathan Toews’ new extension with the Chicago Blackhawks has a $10.5 million cap hit.

His Postseason Success Is Valuable

Krejci’s 77 points in 93 career playoff games rank ninth among active centers. He’s one of just two players — the other is Anze Kopitar — to lead the playoffs in scoring twice since 1999-2000 (Krejci led the postseason in scoring in 2011 and 2013). In fact, Krejci’s 0.83 points-per-game average during postseason play is nearly double Tyler Seguin’s mark of 0.43.

He’s A Perfect Fit For Bruins’ Style Of Hockey
The Bruins are built on a foundation of high hockey intelligence, responsible defense and physical play. Even though it consistently ranks in the top 10 of goals scored and had a successful power play last season, this offense isn’t built around stars with high-end skill.

The B’s prefer forwards with a two-way game who are capable of doing the little things, such as maintaining puck possession, winning faceoffs, contributing to special teams and performing at a high level in the playoffs.

Krejci excels in all of these areas. He averaged 3:11 of special teams ice time (team-high 2:33 PP, 0:38 SH) per game last season, the third-highest among Boston forwards. His defensive abilities are underrated (he finished 12th in Selke voting), and he consistently backchecks, plays a physical game and fights for loose pucks in the corners and along the boards. Krejci also had a solid 52.6 corsi-for percentage (puck-possession stat) last season, helping the Bruins finish third in CF%.

Krejci probably won’t be a point-per-game player, but his all-around skill set makes him extremely valuable in all areas of the ice.

What About The Salary Cap?
Centers’ value to team success makes them expensive, and according to Sportsnet’s Elliotte Friedman, 22 teams have a center with an AAV of $5 million or higher.

Krejci’s $7.25 million cap hit will be the highest on the Bruins when the deal begins in 2015-16, but that’s a good number for Boston because the veteran center likely would earn more if he went to the open market. Teams overpay for top-six centers in free agency, especially players with Krejci’s playoff pedigree. The salary cap should rise dramatically over the duration of this extension because of league revenue increasing and the new Canadian television deal with Rogers, so Krejci’s extension could become a bargain very soon.

With this contract, the Bruins have five of their top six forwards, in addition to Zdeno Chara, Dennis Seidenberg and Tuukka Rask all signed for at least the next two seasons. This gives Boston a championship core in the short term.

General manager Peter Chiarelli’s next challenge is to re-sign defenseman Torey Krug and right winger Reilly Smith. Given the B’s current cap situation — they’re $809,143 over the ceiling, per CapGeek — Chiarelli might need to make a trade to create enough room to sign Krug and Smith, even after Marc Savard’s contract goes on long-term injured reserve. 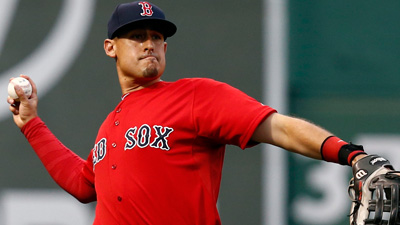