Nineteen games remain in the Boston Red Sox’s 2014 season. For David Ortiz, that’s 19 too many.

Ortiz, whose Red Sox are just one season removed from a World Series championship, spoke Sunday of the frustration he feels knowing the playoffs are not an option for this year’s squad.

Despite the toll this season has taken on his body, the 38-year-old slugger has played in all but 10 of the Red Sox’s 143 games and entered Monday night just two RBIs shy of his eighth 30/100 season, which would surpass Ted Williams for the most in team history.

But while Ortiz’s performance on the stat sheet has remained consistent, the Red Sox have plummeted in the standings, which is a difficult pill to swallow for Big Papi.

Ortiz says he “(doesn’t) want to put a deadline” on his baseball-playing days and isn’t planning a Derek Jeter/Mariano Rivera-esque retirement tour, but he clearly knows the twilight of his career is approaching. Few players continue to perform at a high level into their 40s, and doing so as a power hitter is especially rare.

As retirements creeps closer for Ortiz, the debate intensifies over whether he — or any career designated hitter — belongs in the Hall of Fame. Ortiz says he still has to bolster his case for Cooperstown before stepping away, but he doesn’t believe his position should automatically disqualify him.

“The Hall of Fame means something to everybody,” he told ESPNBoston.com. “In my case, look, I’m very emotional, (and) I’m sentimental. I don’t want to make myself think I’m going to be in it, in case it doesn’t happen, because one day I don’t want to wake up and be like, ‘Man, it’s crazy how hard I worked and all the things I accomplished while I played, and people think because I was a DH I don’t deserve to be a part of where the greatest go to.’

” … I’ll keep on playing, and we’ll see how it plays out. I’ve got to continue putting up good numbers because the more numbers you accumulate, the better it is. I’ve got the DH thing against me, which is something I don’t think is fair because it is what it is, it’s part of the game. I haven’t seen a position player go to the Hall of Fame just because his whole career he played good defense.

“You don’t do some damage with your bat, you’re not going anywhere. It doesn’t matter if you win 20 Gold Gloves — period.” 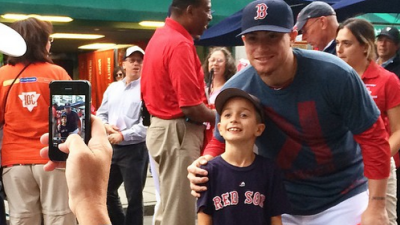