Cecchini, starting in place of an injured Will Middlebrooks, launched his first major league home run Wednesday as the Red Sox defeated the Tampa Bay Rays 11-3 at Fenway Park. Cecchini, appearing in his seventh big league contest, also flashed some leather down at the hot corner.

“Dream come true, I guess,” Cecchini said of his milestone blast. “As a little kid, you dream of hitting home runs in the big leagues. I thought I had one (Tuesday), but this one was pretty cool.”

Cecchini?s home run came off Rays starter Jake Odorizzi, who lasted only three-plus innings. The Boston third baseman turned on a 2-1 fastball in the second and crushed it into the Rays? bullpen, giving the Red Sox their first run and offering a glimpse of a developing aspect of Cecchini?s game.

Cecchini hit seven homers in 114 games with Triple-A Pawtucket this season. The 23-year-old has 21 homers in 393 minor league games over parts of four seasons since being drafted in the fourth round in 2010. He’s known mostly for his on-base prowess, but he?s suddenly proving capable of producing occasional pop.

?I thought the games in which he?s started — the two here and the one down in Baltimore — he?s showing a little bit more surprising power to the pull side,? Red Sox manager John Farrell said after the game. ?He?s been a high average guy and a line drive type of a hitter, but he?s got some power to the pull side and we saw it tonight as another example.?

The home run wasn’t Cecchini?s first significant contribution of the night. Red Sox starter Anthony Ranaudo allowed two runs in the first inning, putting Boston in an early hole. The deficit would have been larger, but Cecchini made a diving stop with Wil Myers on third base to save a run and end the opening frame.

?I had some good reaction,? Cecchini said of his glove work, which included two other diving plays on hot shots in the eighth inning. ?I had some good hops go my way. I just tried to save our pitchers from earned runs.?

So, what did Cecchini enjoy most: the home run or the defensive plays? Neither. The end result was what had the rookie smiling ear to ear.

Cecchini has been considered a work in progress this season. The early production in the majors — .313 average (5-for-16), .450 on-base percentage in seven games — has been impressive, though, so don?t sleep on him eventually carving out a role in 2015 if things don?t exactly take shape at third base this offseason. 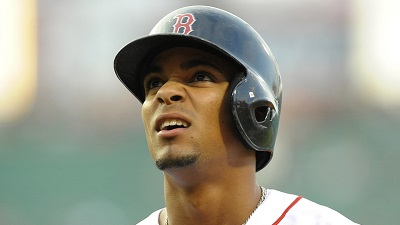 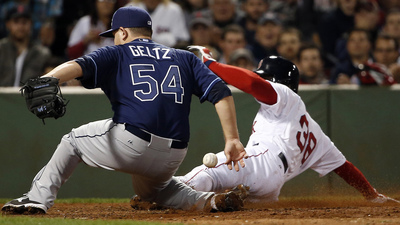