This might be a good week to catch up on all that yard work you’ve been putting off.

The Week 3 NFL slate is filled with underwhelming matchups, either because the games will be one-sided or because both teams are pretty bad. Basically, if you’re pinned to your couch for Chiefs-Dolphins, your dedication as a fan is downright heroic.

Still, there is one marquee matchup between the Denver Broncos and Seattle Seahawks, and at least a handful of other watchable games. Our panel of “experts” are unanimous in predicting who will win the big one, though.

Ben’s pick: Falcons. Or, more accurately, not the Bucs. Until they show me otherwise, that will be my motto for the rest of the season. #NotTheBucs

Darren’s pick: Falcons. The Bucs have played a couple of close games and clearly have made strides since last season’s debacle. They’re still 0-2, however, and if Falcons can beat the Saints in the Georgia Dome, they can handle Tampa Bay.

Mike’s pick: Falcons. The Lovie Smith era in Tampa Bay appears like it’s going to be a work in progress. Don’t trust the Falcons, but it’s not enough to take the Bucs here.

Ben: Bills. Philip Rivers made some flat-out studly passes last week, which means there’s no way in the world I’m taking the Bolts, because the second rule of NFL picks is that just when you really start to believe in Rivers, it’s a virtual certainty he’ll let you down. (The first rule is the same, only it involves Tony Romo rather than Rivers.)

Darren: Bills. This one’s tough, as both teams can be maddeningly inconsistent. I’m tempted to take the Chargers after their Week 2 takedown of the Seahawks, but something tells me they’ll lay a stinker in Buffalo.

Mike: Bills. The home-field advantage, paired with the Chargers going into the Eastern time zone, is just barely enough to take the Bills.

Ben: Browns. With controversy swirling, the Ravens had the ultimate circle-the-wagons win last week. That means this week will bring the ultimate let-down loss.

Darren: Ravens. The Browns pulled off the upset last week, but let’s be honest, they’re still not that good. The Ravens’ D should capably handle Cleveland’s offensive attack, regardless of which quarterback is leading it.

Mike: Ravens. The Browns had a nice win last week against the Saints, but they’re still not a good team, so consistency isn’t one of their calling cards yet.

Ben: Bengals. The Titans were shut out in the first half at home by the Cowboys, and the Bengals have given up the third-fewest points of any defense so far.

Darren: Bengals. Cincinnati hasn’t lost a regular season home game since 2012, and it’s not about to break that trend against a terrifically average Titans team.

Mike: Bengals. Cincinnati doesn’t lose at home — unless it’s the playoffs — and there’s nothing about the Titans that makes you think that will change this week.

Ben: Rams. Austin What’s-His-Face delivered for me last week, and while the Rams aren’t facing a team coached by Lovie Smith this week, they are at home, and Dallas is coming off a victory, and … OK, this is probably a dumb pick.

Darren: Cowboys. History would dictate that Dallas’ Week 2 win means it’s time for a loss, but the Rams just haven’t showed me enough in the first two weeks to suspect they can outscore the Cowboys here.

Mike: Cowboys. DeMarco Murray ran for 167 yards last week, and only two teams are allowing more yards per rush than the Rams. So, yeah.

Ben: Packers. My imaginary bookie says the over/under for points scored in this game is a bajillion. I’m laying my life savings (which is roughly $14) on the over.

Darren: Packers. The Packers’ offense is officially firing on all cylinders, and the Lions certainly won’t be the ones to stop them.

Mike: Packers. Soooo many points will be scored in this one, and we’ll take the Packers to win as they seek revenge for getting their doors blown off in Detroit on Thanksgiving last season.

Darren: Texans. The Giants have scored just 14 points in each of their first two games. Even Ryan Fitzpatrick and Co. can top that, and they will on Sunday to beat Houston’s 2013 win total.

Mike: Texans. Houston is tied for second in turnover ratio this season, while the Giants rank dead last. If you can’t protect the football, you can’t win football games.

Darren: Colts. In the battle of the AFC South basement, the Colts finally will prove they don’t suck by trouncing a Jaguars squad that managed to lose by 31 to the Redskins last week.

Mike: Colts. The more I watch the Colts, the better I feel about my preseason thought that they were a bit overrated. They’re not great, but at least they’re not the Jaguars.

Ben: Saints. I can’t figure out the Saints, but I also can’t figure out what the heck the Vikings are thinking with their handling of the Adrian Peterson fiasco, so I guess I’ll just roll with Drew Brees and take my chances.

Darren: Saints. The pressure is on in New Orleans, and there’s no way the Saints lose at home to a Peterson-less Vikings squad. If I’m wrong, they’re in deep trouble.

Mike: Saints. If Saints can’t win this game — at home against a team going through controversy — then they’re awful.

Ben: Patriots. Raiders safety Charles Woodson is one of my all-time favorite players to watch, so when he says “we suck,” I listen.

Darren: Patriots. Julian Edelman said earlier this week that the Raiders are a very “experienced” team. That means they’re really old, and really bad. The Pats should have little trouble winning their home opener.

Mike: Patriots. Jimmy Garoppolo has to make his NFL debut in mop-up duty at the end of this blowout, right?

Ben: Eagles. Darren Sproles and LeSean McCoy are so much fun to watch. The Birds could have the NFC East wrapped up by Week 8.

Darren: Eagles. Philly surprised a lot of people (aka me, Ben and Mike) with its comeback win over the Colts last week. The Eagles won’t surprise anyone by taking care of the Redskins at home.

Mike: Eagles. This would be a good week for Philly to get it all together and put together a full 60-minute effort.

Ben: Cardinals. Now we’re talking. After a bunch of games I wouldn’t watch if you strapped me down and pinned my eyes open “Clockwork Orange” style, this one features a hungry Niners squad and an actual NFL quarterback under center for the Cards.

Darren: Cardinals. I’m going with the hot hand. The Niners are coming off a demoralizing loss on “Sunday Night Football” and could be without Vernon Davis, while the Cardinals should have Carson Palmer back, which should be just enough for the home team to win a tight one.

Mike: 49ers. This was a tough one, and there’s no good way to explain it other than to say it’s a gut feeling. Deal with it.

Ben: Seahawks. Hey, another good one. Sweet. I’ll take whoever’s at home, which is the Seahawks, so … them.

Darren: Seahawks. Can’t wait for this one. The Broncos will be out for blood, but the Seahawks are just too tough to beat at home. It won’t be the beatdown we saw in the Super Bowl, but Seattle should take care of business.

Mike: Seahawks. Seattle just doesn’t lose at home, and Richard Sherman has some extra motivation after he was “exposed” last week against the Chargers.

Ben: Chiefs. The Chiefs have no players left and they’re on the road, so there’s very little justification for this pick other than believing Andy Reid is a better coach than Joe Philbin.

Darren: Dolphins. Kansas City almost beat the Broncos last week, but it also lost Jamaal Charles and Eric Berry in the process. Even a Knowshon Moreno-less Dolphins team should be able to get the win against the decimated Chiefs.

Mike: Dolphins. Who really cares, though?

Ben: Panthers. It feels like Ben Roethlisberger has taken a season’s worth of punishment already. Unfortunately for him, that probably won’t change, even with Greg Hardy on the exempt list.

Darren: Panthers. The Steelers’ offense looked awful against the Ravens last Thursday night, so facing one of the best defenses in the NFL on the road in Week 3 isn’t exactly what they need.

Mike: Panthers. The Steelers are a sloppy team right now, and the Panthers’ defense has the ability to feast on teams like that — with or without Hardy.

Ben: Bears. Chicago’s defense hasn’t looked nearly as terrible as advertised, and it will look even less terrible against the Jets.

Darren: Bears. Chicago is coming off a rousing “Sunday Night Football” win over the Niners, while the Jets did what the Jets do best (i.e. lose in embarrassing fashion) against the Packers. If Alshon Jeffery and Brandon Marshall are healthy, they should have a field day against the leaky ship that is the Jets’ secondary.

Mike: Bears. Chicago isn’t getting enough credit for what its defense did last week against Colin Kaepernick and the 49ers’ offense, especially in the second half. They’ll pick up where they left off Monday against Geno and the Jets. 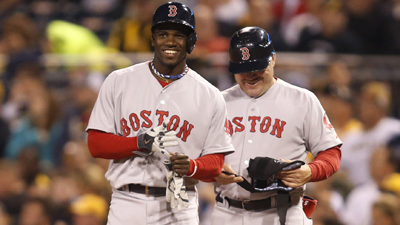 Report: Vikings ‘Do Not Foresee’ Adrian Peterson In Their Future