Red Sox Injury Updates: Will Middlebrooks Not Being Shut Down For Year - NESN.com Skip to content BOSTON — Several Red Sox players might want to use the beginning of the offseason to rest.

The Sox are a banged-up bunch with less than a week remaining in the 2014 regular season. Multiple players are sidelined with injuries, while others are doing their best to push through lingering ailments.

Bogaerts left Sunday?s game against the Baltimore Orioles at Camden Yards in the second inning. The shortstop then was a late scratch from Tuesday?s series opener against the Rays.

?He went out, took BP, took ground balls and the stiffness he was feeling in his neck has reduced quite a bit since (Tuesday),? Farrell said.

— Will Middlebrooks remains sidelined, though the Red Sox aren?t ready to shut down the third baseman.

Middlebrooks also was scratched from Tuesday?s lineup. He?s dealing with a right hand issue that?s been hindering him for some time.

While it?s unclear whether Middlebrooks will play again this season, the Red Sox are pushing to get him back on the field at some point over the final four games.

?More than anything, if a player is capable, we?re not just one to shut someone down,? Farrell said. ?That?s not a precedent that we want to set or enable, to be honest with you.?

Middlebrooks is hitting .191 with a .522 OPS and 70 strikeouts in 63 major league games this season. He only has two homers, raising questions about how serious a role his hand injury has played in his continued regression.

?I don?t think he?s been limited any different than other players that deal with nagging ailments over the course of a full season,? Farrell said. ?There?s been times when he?s been unavailable, but to say that it?s to the extent to where he can?t go or can?t play, we?re not at that point.

?He?s missed time over the last couple of years, as we know, so the consistent playing time has had some effect. But to say that there?s something existing here — sure, he?s banged up a little bit. Is that the sole reason why the power numbers have dropped? I can?t say that it is.?

Ortiz suffered the injury during his second-to-last at-bat Tuesday and was held out of Wednesday?s starting lineup.

?He?s banged up,? Farrell said. ?Still, the finger issue, the toe. We?re still trying to get through all that.?

-Shane Victorino, who underwent back surgery last month, was in the Red Sox?s clubhouse before Wednesday’s game. The outfielder appeared to be in good spirits.

?His range of motion continues to improve,? Farrell said. ?He?s very upbeat on the rehab and the physical therapy he?s going through — the strengthening to his core, that continues to improve. It hasn?t changed the overall timeline to his return, but there?s been no setbacks of any kind.? 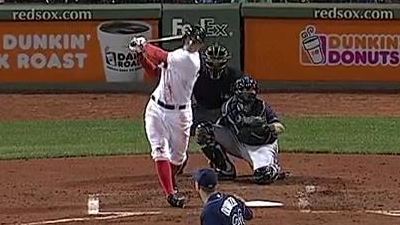