The Royals, who dropped their first five games against the Boston Red Sox this season, enjoyed a convincing 7-1 win Saturday at Kauffman Stadium. The Red Sox were completely shut down by Royals starter Jeremy Guthrie en route to their 84th loss of 2014.

There weren?t too many positives from a Red Sox standpoint. Boston looked primed to play the role of spoiler in the first two games of the series, but the third game was a mess for the Sox, particularly offensively.

— Rubby De La Rosa might finally be feeling the effects of his career-high workload.

?Good stuff, inconsistent location,? Red Sox manager John Farrell told reporters in Kansas City after the game. ?Some inability to put guys away with any kind of breaking ball or changeup that had some depth to it or finish to it at the bottom of the strike zone.?

De La Rosa has thrown 156 innings this season, 96 of which have come at the major league level. His previous career-high was 110 1/3 innings in 2010, when De La Rosa was still in the Los Angeles Dodgers organization.

De La Rosa said after the game he felt good, but the results said otherwise.

Wright, who tossed three shutout innings, has allowed only one run over 12 innings in three relief appearances with the Red Sox this season.

The 30-year-old knuckleballer is making a case for a major league role in 2015, even if he?s an underdog in the situation.

— Matt Barnes was very impressive in his major league debut Tuesday. The same couldn?t be said for his second appearance.

Barnes, who tossed three shutout innings Tuesday against the Baltimore Orioles at Fenway Park, allowed two earned runs on three hits and a walk in the eighth inning against the Royals.

?On two occasions once again an 0-2 base hit and a 1-2 base hit, and I think those are learning experiences, particularly at this level where the ability to use your stuff to put a hitter away with (is important),? Farrell said.

Barnes, who featured an impressive three-pitch mix against the O?s, still struck out three hitters — all on fastballs — but was hit hard on a couple of offspeed offerings.

— The Red Sox?s only run was the product of Yoenis Cespedes? sacrifice fly. It plated David Ortiz, who singled, in the third inning.

Allen Craig?s pinch-hit single off Brandon Finnegan with two outs in the ninth broke up a string of 19 batters in a row retired by Royals pitching.

— Mookie Betts survived his first major league game at second base without any mishaps.

— The Pawtucket Red Sox captured their second International League championship in three years with a 4-1 win over the Durham Bulls. Ryan Lavarnway was named the Governors? Cup Finals MVP. 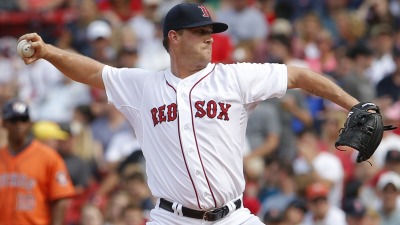 Adrian Peterson Featured On Vikings’ Tickets For Game Against Patriots