Uehara?s recent rough patch might have forced the Red Sox to temporarily remove him from the closer?s role, but it did little to change Boston?s overall opinion of the veteran reliever. Re-signing Uehara, who is set to become a free agent after this season, remains an offseason priority for the Red Sox.

“It hasn’t changed interest on our part in having him here,? Red Sox general manager Ben Cherington told reporters before Wednesday?s game against the Pittsburgh Pirates at PNC Park. “He went through a stretch, which he’s been through before, and the nice thing about Koji is he’s as accountable as anyone and acknowledges it and usually has a pretty good handle on what’s going on.?

Uehara was removed from Boston’s closer role in favor of Edward Mujica after a six-appearance stretch in which he allowed 10 earned runs on 14 hits over 4 2/3 innings while blowing three saves and suffering three losses. The club?s plan is to use Uehara in lower-leverage situations as he works through his struggles before ultimately reinserting him as the closer before the end of the 2014 season.

Uehara has tossed back-to-back scoreless outings after an eight-day hiatus, suggesting his woes could be behind him. There?s some risk involved with re-signing Uehara, as he?ll turn 40 years old before Opening Day 2015, but his overall body of work over the last two seasons is impressive.

“The way that he handled the recent period where he struggled a little bit and how he handled getting out of it reflects well on him positively,? Cherington said Wednesday. “We haven’t had any other conversations and there will be an appropriate time for that this offseason. But our interest is still there.”

Uehara has posted a 1.77 ERA, a .073 WHIP and a 10.59 strikeout-to-walk ratio over 136 regular-season appearances spanning 137 2/3 innings since signing with the Red Sox before the 2013 season. The 39-year-old, who has been unhittable at times, has compiled 47 saves in addition to enjoying playoff success with Boston.

Clearly, there are reasons for the Red Sox?s faith. 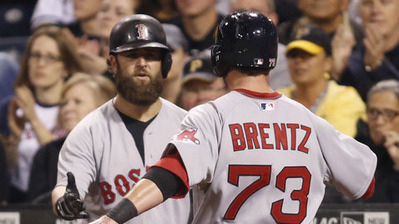