The 18th season of “South Park” debuted Wednesday night, and nobody in the NFL was safe.

A one-minute teaser of the season opener aired over the weekend, showing the Comedy Central show absolutely blasting the Washington Redskins nickname and its trademark cancellation. The sneak peek, which aired during the Philadelphia Eagles-Washington Redskins game Sunday, showed Robert Griffin III standing next to an irate Dan Snyder and Jay Gruden.

But with RG3 sidelined with an ankle injury, the show made a last-minute adjustment to swap in the team’s new starting quarterback, Kirk Cousins, effectively “benching” Griffin.

The show also took down Ray Rice and Roger Goodell’s handling of the situation, using actual audio from his nightmare of a press conference Friday afternoon. The show mocked the commissioner for his “nothing” answers that made him sound somewhat robotic and turned him into an actual malfunctioning robot.

The episode also included an elevator scene and some shots being fired at Jerry Jones because, well, the NFL gave them plenty of material to work with for one episode. 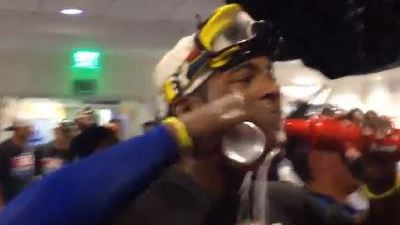