Alex Rodriguez might be asked to showcase some versatility when he returns to the New York Yankees.

The third baseman is set to return to the Bronx Bombers’ lineup in 2015 after being suspended for the entire 2014 season. Rodriguez figured to slide right into a vacant third base hole, but he might not be limited to the hot corner.

Yankees general manager Brian Cashman told reporters on a Friday conference call that the club is considering using Rodriguez at first base, too.

“Joe Girardi talked to him about getting some work at first base,” Cashman said Friday, according to the New York Post. “Until we see what he can do on a daily basis, it’s hard to assume anything.”

It certainly would make sense for the Yankees. Not only is Rodriguez coming off a season in which he didn’t play at all, he’s 39 years old. That’s not an ideal scenario for someone to be playing a demanding position like third base.

“I don’t think you can assume he can play third base,” Cashman added. “With his age and missing a full year and how it affected Derek (Jeter) and Mark Teixeira. … In the chair I sit in, it’s safer to assume this is something he might not be able to do the whole year.”

Teixeira is expected to be the Yankees’ Opening Day first baseman, but he’s no sure thing. The 34-year-old has struggled to stay healthy in recent years, playing in just 138 games over the past two seasons.

The Yankees acquired Chase Headley during the 2014 season to play third base, but the former San Diego Padre will be a free agent this winter. 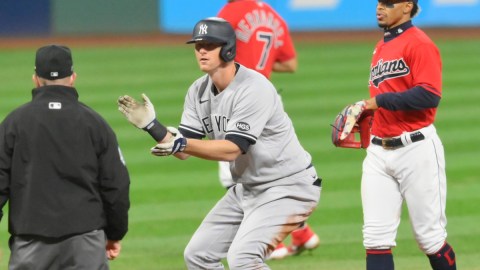