Brad Marchand won’t have any shortage of motivation entering the new season.

The Boston Bruins winger had a nice 2013-14 campaign, but he was under fire when the playoffs roll around. Marchand didn’t score in 12 playoff games after scoring 25 goals in the regular season, and his lack of postseason production was criticized by fans and media.

Over the summer, some speculated that Marchand might be a good trade piece. One report even suggested the B’s were discussing a trade with the San Jose Sharks for Patrick Marleau, a rumor Boston general manager Peter Chiarelli quickly shot down.

However, it sounds as if Marchand kept tabs of those rumors and negativity during the offseason.

“It?s finally nice to have some positive stuff out there in the media instead of all negative,” Marchand told 98.5 The Sports Hub morning host Fred Toucher on Tuesday at Bruins media day. “All you guys talking about, ?Ship Marchand out, 25 goals isn?t good enough!? I heard a lot of media, a lot of media talking about it this past summer. All over the place.”

Marchand did admit, however, that it comes with the territory playing in Boston.

?I guess we should kind of take the good with the bad in Boston,” he continued. “It?s just because we?re such a great sports city that we?re expected to do well. I think the fans and the media have been spoiled here the last 10 years ? with the Pats, the Celtics, the Red Sox, with all the sports teams that are around, all the teams have won so many championships in the past while that now it?s almost expected to win every year and it?s just not that way. The second you drop a couple of games, they completely turn on you. It?s tough sometimes but I guess it?s part of the job.”

Hear the entire interview below. 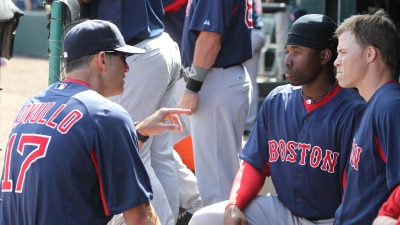