As the San Francisco Giants seek their third World Series title in five seasons, some pundits, including ESPN’s Jayson Stark, are dubbing Posey the new face of Major League Baseball. A popular belief is that someone needs to fill the role vacated by longtime New York Yankees captain Derek Jeter, who retired this season after an illustrious 20-year career in the spotlight.

The topic is subjective, of course. While Jeter’s resume made him worthy of the “face of baseball” label, there still were those unwilling to recognize him as such. Likewise, there are plenty of fans, experts, etc., who think Posey isn’t the right choice to receive the torch.

One thing that’s apparent, however, is that there is an abundance of young, talented players across the league. Each season, MLB’s talent pool seemingly grows, especially given the recent influx of international talent.

Who’s worthy of the “face of baseball” distinction? It’s a debate that will rage on for as long as the game remains in existence. But let’s go over 10 players who could stake claim to the honor based on a combination of age, talent, production, personality and market.

For all intents and purposes, let’s eliminate anyone 30 or older. 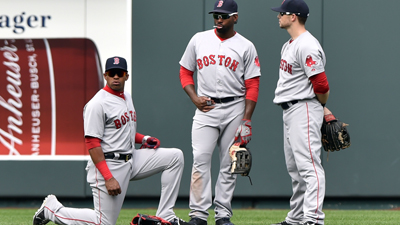 Poll: Which Boston Red Sox Outfielder Is Most Likely To Be Traded?