BOSTON — If it was a baseball game being played at TD Garden on Wednesday, you would have seen a whole lot of guys wearing numbers in the 60s and 70s.

Rest and health were the orders of the day, as the Celtics limited their starters’ minutes and the Brooklyn Nets didn’t even bother to play theirs in the preseason finale for both teams.

The Celtics rode strong performances by Marcus Smart and Jared Sullinger to a 100-86 win. Now, it’s time for the real thing, as Nets return to Boston next Wednesday to open the regular season.

— Smart returned to the starting lineup for the Celtics and proceeded to have one of his best games of the preseason. The rookie buried a 3-pointer on his first shot of the game and only got better from there, finishing with 16 points, four assists and two steals in 16 minutes. He didn’t see the floor in the second half.

Smart’s 3-point shot still is a work in progress — he missed three of the final four shots he took from beyond the arc — but he relied on it less than he has at other points in the preseason. Smart attacked the rim a lot more and made all three of his close-range shots. He also drew two trips to the foul line, where he sank all four of his free throws.

— Sullinger continued to be a monster on the boards, pulling in 13 rebounds in his first 13 minutes. Sullinger played the most of any Celtics starter (26 minutes) and finished with 17 boards in all.

An equally strong performance on the offensive end earned Sullinger his second straight double-double, and he did so by abusing the Nets’ backup bigs in the paint. He went 7-of-10 from the floor (all three misses came from 3-point range) for 15 points and killed a 12-0 Brooklyn run by driving hard for three straight buckets midway through the third.

— Gerald Wallace took on his beloved “Crash” persona late in the first half, when he seemingly was everywhere on the court for a span of about four minutes. Wallace was a perfect 4-for-4 from the floor in the second quarter while dishing out three assists (including two to Smart) and grabbing two steals.

Wallace finished with a preseason-high 12 points on 6-of-8 shooting.

— The Brandon Bass 3-point parade continued, with the power forward nailing a three from the corner in the opening minutes of the second half.

It was Bass’ second trey in as many games, matching his regular-season total from last year.

— Stevens said before the game he won’t be able to adequately judge his team until the end of November, after they get through a stretch of games he called “a heck of a gauntlet.” He’s not wrong:

— Rajon Rondo, whose status still is up in the air for opening night, has begun taking some contact in practice while wearing a pad on his injured left hand, per Stevens. The coach said he could offer no update other than to say the point guard is “progressing well.” 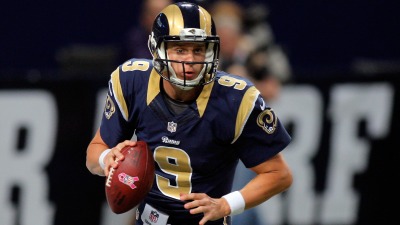 Brett Favre: Rams Quarterback Austin Davis ‘Can Be The Next Tom Brady’