Dwyane Wade has gotten along just fine with LeBron James since he left the Miami Heat for greener pastures. Chris Bosh? Not so much, it appears.

The Big Three era in Miami officially ended this offseason after James, a free agent, signed a two-year, $42 million contract with the Cleveland Cavaliers. Wade has said that he still considers James a close friend, but Bosh had quite a different reaction when LeBron’s name was mentioned Tuesday, revealing that he hasn’t even spoken with the All-Star since he left the Heat in early July.

“I’m in the mode where I’m trying to lead my team, help these guys out around here,” Bosh said, via ESPN.com. “If guys aren’t in this locker room, I don’t have much time for them — if any.”

Bosh, who often played “third fiddle” to James and Wade over the last four seasons, seems determined to focus on the present rather than the past. Yet that past may be inevitable, as Bosh and Co. are set to play James’ Cavaliers in an exhibition game in Rio de Janeiro on Saturday.

So what did Bosh have to say when asked if he was looking forward to reuniting with his former teammate this weekend?

The Heat and Cavs square off in a regular-season showdown on Christmas Day. Don’t expect Bosh to be sending any presents LeBron’s way. 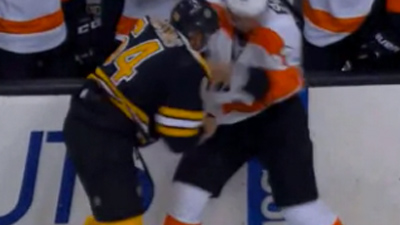