Boston Bruins defensemen hadn’t provided much scoring production in their first six games of the season, but that changed in a major way during Saturday’s 4-0 win over the Buffalo Sabres at First Niagara Center.

Dougie Hamilton opened the scoring with his first goal of the season on a wrist shot from the right point at 9:56 of the first period. The puck traveled about 60 feet and past the traffic in front of Sabres goaltender Jhonas Enroth, which included a good screen by Bruins winger Reilly Smith.

Zdeno Chara doubled Boston’s lead less than four minutes later. Hamilton did a nice job to keep the puck in the attacking zone, then fed a pass to Chara, who fired a shot on Enroth. The puck tumbled into the corner, where Brad Marchand retrieved it and sent it back to the point. Chara’s second shot of the shift beat Enroth, who was again screened by Smith.

Chara’s tally gave the B’s their first two-goal lead of the season, and Hamilton’s assist earned him his first multi-point performance of the campaign.

The Bruins extended their lead to 3-0 when Torey Krug’s wrist shot from the right point beat Enroth high glove side at 11:40 of the second period. It all started with a faceoff win by David Krejci.

One of the reasons why Boston has struggled to score goals to begin the season is a lack of production from its blue line.

Entering Saturday’s game, the Bruins ranked tied for 28th in blue line scoring with just three points (a Chara goal, and assists from Krug and Adam McQuaid). That number now stands at seven after Saturday’s win.

The Bruins got 175 points from defensemen last season, which was a key reason why they ranked third in goals scored. The B’s will need a similar level of offensive production from their blue line in 2014-15 to overcome the offseason loss of first-line winger Jarome Iginla — whose 30 goals tied Patrice Bergeron for the team lead — and the chances of that happening are pretty good.

Hamilton is developing into a legitimate top-pairing player, and his puck-moving skills and offensive instincts are really impressive. Krug led all rookie defensemen with 40 points in 2013-14 and skates the puck better than any blueliner on the team. He has tremendous value on the power play with his powerful shot and sharp playmaking skills. Chara still is a reliable point producer at age 37. He’s difficult to handle in front of the net on the power play (where he scored in Thursday’s 6-4 loss in Montreal), and his slap shot is the most powerful in the league. Dennis Seidenberg and Adam McQuaid could combine for 25-35 points if they remain healthy for a full season.

The Bruins’ blue line is loaded with more offensive talent than it’s had in a long time. As a result, Boston will need to rely on its defensemen to provide consistent scoring production until the team acquires another top-six goal-scorer, or until one emerges from within the organization. 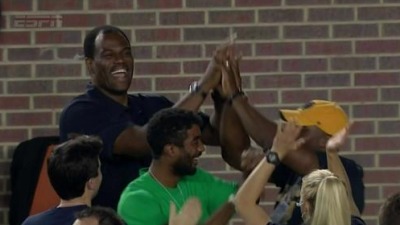