BOSTON — Bruins general manager Peter Chiarelli confirmed reports that captain and No. 1 defenseman Zdeno Chara will be out for four to six weeks with a knee injury.

Chiarelli said Chara tore the posterior cruciate ligament in his left knee on a collision with New York Islanders captain John Tavares during the first period of Thursday night’s game at TD Garden. Chara doesn’t need surgery at this time, and it’s possible he could return sooner than four weeks.

“This is completely different, separate, isolated from the other ligaments that are more critical in the maneuvering of the knee,” Chiarelli said. “The good news is it’s isolated to that ligament. The bad is he out’s four to six weeks. It might be a little bit earlier than four to six weeks, but a conservative timeframe would be four to six weeks.”

Chiarelli wouldn’t comment on the possibility of the Bruins looking to trade for a defenseman. It should be noted that defenseman Kevan Miller also is out of the lineup with a dislocated right shoulder suffered Saturday against the Buffalo Sabres. He is out indefinitely.

Boston recalled defensemen prospects Zach Trotman and Joe Morrow from the Providence Bruins, and they will join the team for Friday’s practice. 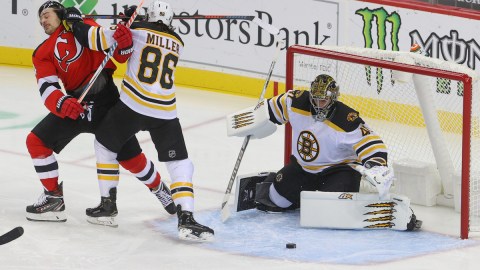