Bradley, who undeniably should have earned American League Gold Glove honors ahead of Baltimore Orioles center fielder Adam Jones, is facing an uncertain future based on his failure to make offensive strides in 2014. The 24-year-old?s minor league track record and pure talent suggest he?ll someday put it all together at the plate, but the mere possibility of baseball fans not witnessing his defensive greatness daily is unsettling.

The Gold Glove has long been an award with questionable credibility. While its purpose is clear — recognize the top defensive players in each league — it?s obvious there?s a bias toward players who also produce offensively. How else could one explain Jones bringing home hardware over Bradley?

Bradley?s 15.9 Ultimate Zone Rating (UZR) — the number of runs above or below average a fielder is in both range runs, outfield arm runs, double play runs and error runs combined, according to FanGraphs — was the best among primary AL center fielders, far ahead of the marks posted by both Jones (8.3) and Eaton (-3.3).

Bradley?s 4.8 arm score also stacked up favorably with his counterparts, though Jones? 6.7 arm score was sandwiched between the Red Sox rookie?s mark and Martin?s league-best 11.9 mark.

Admittedly, defensive metrics have their flaws. Bradley obviously had a very strong case no matter how it was sliced, though, and turning a blind eye to his defensive prowess only strengthens the argument that the Gold Glove is, in many cases, a sham.

But that?s nothing new. Getting all riled up about the validity of the Gold Glove isn?t even worth it at this point, unless, of course, you?re Bradley or one of the other MLB players who has been snubbed over the years.

Defense is an area of baseball that?s difficult to quantify. As such, it?s impossible to appreciate unless you?re exposed to a player consistently. Anyone who watched Bradley patrol center field with the Red Sox this season will tell you he?s far more than a good defender. He?s elite.

The question, of course, is whether Bradley will ever hit enough to be an everyday major league contributor, either in Boston or elsewhere. His defense should ensure he?ll stick around the game in some capacity, but his defensive expertise will be wasted, to some extent, if he?s not on the field with regularity, especially given that he plays a premium position.

Someday, Bradley might become an offensive force, in which case he?ll probably land a few Gold Gloves. And for the Red Sox?s sake and baseball?s sake, let?s hope that day comes sooner rather than later.

Bradley is too fun to watch, award or no award. 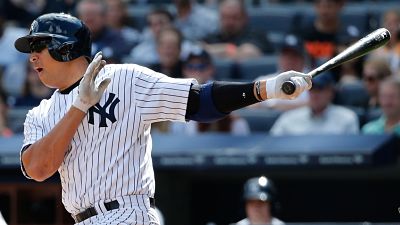 Report: Alex Rodriguez Admitted To Steroid Use In DEA Confession