Jonas Gray Among Patriots' Stars In Win Over Colts With Four-TD Effort - NESN.com Skip to content INDIANAPOLIS — The New England Patriots’ 42-20 win over the Indianapolis Colts was closer than the score appears, we promise.

The game was a downright battle for three quarters, and an Andrew Luck comeback seemed imminent. Then the flood gates opened, Rob Gronkowski plowed through the entire Colts defense, Julian Edelman threw a crushing block, and the Patriots sealed an incredibly important road victory over a threatening team.

Check out this week’s stars of the game:

JONAS GRAY
Gray had the best game of his brief NFL career, carrying the ball 38 times for 199 rushing yards and four touchdowns. The first-year pro was a human wrecking ball, and the Colts’ defense was having fits trying to stop him from powering through the middle of its front seven.

The 5-foot-10, 225-pound Notre Dame product waited a long time to get his opportunity in the league after tearing his ACL as a senior with the Fighting Irish in 2011. He was signed by the Miami Dolphins as an undrafted free agent in 2012, and he spent last year on the Baltimore Ravens’ practice squad.

The decision to sign Gray as a futures free agent has paid off, though, with starting running back Stevan Ridley out for the season with a knee injury. Gray has taken over the between-the-tackles duties, and he’ll be incredibly important down the stretch and into the playoffs.

DEVIN MCCOURTY
The Patriots’ secondary didn’t have a great game overall, allowing 303 passing yards to Colts quarterback Andrew Luck. But McCourty made a heads-up play in the first half when he picked off Luck after a tip from Patriots cornerback Darrelle Revis on a pass intended for Indy wideout Reggie Wayne.

DONT’A HIGHTOWER
The Patriots were stout against the run for their second straight game, allowing just four yards on 14 carries to the Colts running backs. Hightower was all over the field, stuffing rushing lanes and pressuring Luck. Fellow linebacker Jamie Collins also was stout.

JULIAN EDELMAN
Edelman had another drop, but he rebounded from the mistake with contributions in the run and passing game. He caught five passes for 50 yards and carried the ball twice for 31 yards. He also threw a crushing block on a 26-yard Rob Gronkowski touchdown.

ROB GRONKOWSKI
Gronk wasn’t quite as beastly as he has been over the last two games, but he still caught four passes for 71 yards with a touchdown. There’s no doubt that Gronk is the best tight end in the NFL right now. 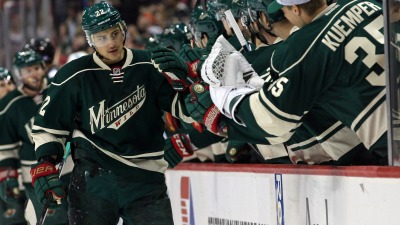