Editor’s note: NESN’s Tom Caron is on the 50-member USCHO ranking committee, and you can find his votes and thoughts on the college hockey week that was every Monday on NESN.com.

Last week, I had North Dakota in the No. 1 spot. This week, I dropped UND to No. 2 despite going 2-0 over the weekend.

It?s not because of anything UND did wrong, though. It’s because of what Minnesota did right. The Gophers dominated Notre Dame in a weekend sweep, outscoring the Irish 9-2.

Boston University jumped up two spots and sits third in my poll after an impressive win at Boston College on Friday night. The Terriers gave up a late goal in a 4-4 tie with UConn at home the next night, but we?ll forgive them for a letdown after a stirring win in the Battle of Comm Ave.

UConn isn?t in the poll at 2-4-3, but deserves a shoutout after a win over BC and a tie at BU. Head coach Mike Cavanaugh has the Huskies riding high, and more than 8,000 fans packed the XL Center for the first home Hockey East game in school history.

Vermont jumped five spots in my poll and cracked my top 10 after sweeping Maine at the Gut, while Nebraska-Omaha made my poll for the first time after two road wins at Ohio State.

Merrimack didn?t make the cut despite a strong weekend against 16th-ranked Providence, but that could change next week as the Warriors have a good test ahead of them. They welcome Notre Dame to Lawler Arena this weekend for two games. 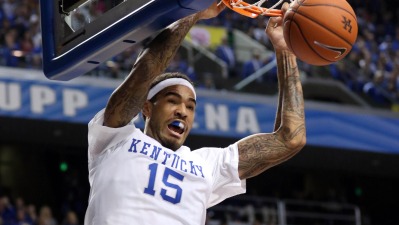