Ryan Tannehill must have been the most unhappy person in New England to see Chandler Jones back on the field Sunday.

The premier edge defender returned from a hip injury, and the New England Patriots’ defense churned out its best pass-rush performance of the season in a 41-13 blowout win over the Miami Dolphins. The Patriots pressured Tannehill all game and finally sacked the Dolphins quarterback four times in the fourth quarter.

The Patriots now have Jones, Rob Ninkovich, Akeem Ayers, Dont’a Hightower and Jamie Collins in their pass-rush arsenal to combine with big bodies in the middle Vince Wilfork, Sealver Siliga, Chris Jones, Alan Branch and Dominique Easley. The Patriots can be creative using those weapons by blitzing Hightower and Collins up the middle, using Chandler Jones at defensive tackle and dropping Ayers and Ninkovich into coverage.

The Patriots also can choose to overstack one side of the line to overwhelm one player or group.

It’s going to be a long winter for opposing quarterbacks. Let’s see how this group fared Sunday:

CHANDLER JONES PICKS UP WHERE HE LEFT OFF

Chandler Jones and Ninkovich led the Patriots in total pressures with seven apiece. Jones gets the slight edge for a better pass-rushing performance since he played fewer snaps and was in on two sacks.

Collins continued his assault on opposing quarterbacks. He should have been credited with half of Siliga’s sack, since the linebacker tripped up Tannehill before the defensive tackle tackled him.

Ninkovich has recorded eight sacks in three consecutive seasons. He’s the first to do so since Pro Football Hall of Famer Andre Tippett, who had at least three sacks every season from 1983 to 1987.

The Patriots’ All-Pro cornerback began the game on slot receiver Jarvis Landry, with Malcolm Butler covering Mike Wallace and Brandon Browner following Brian Hartline. Wallace immediately burned Butler for a 50-yard reception on the first offensive play of the game, and Kyle Arrington came on to cover the speedy receiver.

When Arrington suffered a hamstring injury — he’s fine and should avoid injured reserve, per a source familiar with the situation — Butler came back on the field, and Wallace burned him again on the Dolphins’ final offensive play of the half, a 32-yard touchdown.

Logan Ryan came on the field for the second half and started tracking Landry with Revis now on Wallace and Browner still on Hartline. That was a much more effective combination for the Patriots, as they held the Dolphins scoreless in the second half. 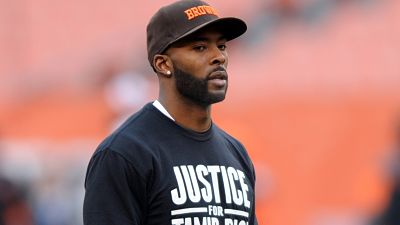