The Red Sox left this week?s Major League Baseball winter meetings in San Diego without Jon Lester. Instead, they reportedly acquired the likes of Wade Miley, Rick Porcello and Justin Masterson, giving Boston a starting five filled with both upside and risk.

The book isn?t closed on the Red Sox?s offseason. Not by a long shot, in fact. Since Boston acquired the three aforementioned hurlers without surrendering any major trade chips or spending a fortune, the Red Sox still could make a splash and land the ace they so desperately need.

Red Sox general manager Ben Cherington didn?t tip his hand Thursday while discussing the club?s rotation. His comments suggest he?s satisfied with the recent transactions but also willing to explore additional options if they make sense for the ballclub.

?I think we feel like, hopefully, if we?re able to push some other stuff across the goal line that we?ll be in strong position with the rotation,? Cherington told reporters in San Diego. ?It doesn?t mean that we?d be disinterested in considering other stuff, but that we?d be in strong position with the group of guys who we feel can be good major league starters in our division next year, and also because of the group of young pitching that we would?ve protected will have a chance to develop behind them.?

The Red Sox don?t need to apologize or explain themselves for not signing Lester. Boston?s reported six-year, $135 million offer was reasonable, especially since such long-term contracts rarely pan out. The Sox do, however, have to determine whether their current batch of starters is good enough for Boston to contend in 2015.

Let?s go under the hood and assess the situation post-winter meetings.

On the bubble: Justin Masterson, RHP

The Red Sox already have at least five viable starting pitching options, yet the current staff leaves much to be desired as far as front-line talent is concerned. While Boston could win games with the current unit, the Red Sox should use their flexibility to acquire someone capable of spearheading the group.

Buchholz has the highest ceiling of Boston’s starters despite the injuries and inconsistency he endured in 2014. As it stands, he?s probably the Red Sox?s Opening Day starter if they don?t add any more pieces. That?s a somewhat startling reality that speaks to the rotation?s talent distribution. It truly lacks a front-end presence.

The other parts are interchangeable as far as where everyone slots in. Porcello and Miley both have had their moments. Kelly was impressive down the stretch after being acquired by the Red Sox, but he hasn?t pitched a full season as a starter. Masterson was an All-Star in 2013, but he was terrible in 2014.

If the Red Sox acquire a No. 1 starter, it?ll bump one of the five in question, provided they all remain on the roster. Masterson has the most to prove at this point, especially since there already have been rumblings about whether he?ll someday end up in the bullpen if he can?t right the ship in a starting role.

The Red Sox have to flush out their bullpen in addition to assembling their rotation. That means role changes could be on the horizon.

Workman, Ranaudo and Barnes are candidates to begin the season in the major league bullpen. Owens, Johnson and Rodriguez will continue to be groomed as starters. Don’t be surprised if any of these six pitchers find their way into the rotation at some point in 2015 if injuries or struggles crop up.

Verdict
The Red Sox wisely added three good pitchers this week. Their rotation, as constituted, is better than some suggest.

That being said, the Red Sox need a horse. While it?s possible to win without a true ?ace,? especially if Boston?s new-look offense comes as advertised, a legitimate No. 1 starter would go a long way toward stabilizing a rotation that currently consists of five middle- to back-of-the-rotation starters.

The Red Sox’s rotation got better over the last four days. It shouldn’t be a finished product.

Mat Latos’ Wife Finds Out He’s Being Traded On Twitter, Freaks Out 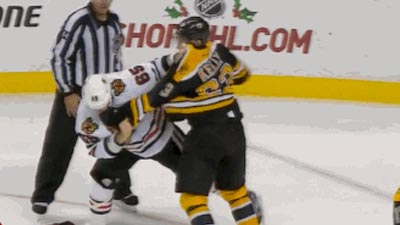