Greg Monroe does not want to stick around with the Detroit Pistons. But that doesn’t mean he’ll come at a cheap price.

The 24-year-old big man badly wants out of Detroit, but the Pistons are seeking a first-round pick in return, sources told Sporting News on Monday.

Monroe and the Pistons failed to agree on a long-term contract this offseason, a sign that his time in Detroit could be limited. He signed a one-year, $5.48 million qualifying offer with the club in early September, but it seems as though a change of scenery could come before season’s end. Per NBA rules, Monroe is eligible to be traded as of Monday.

“Everyone knows he wants out of there,” the source told Sporting News. “There is almost nothing he would shoot down.”

Monroe certainly has the talent to draw interest from several teams. The Georgetown product has scored 1,000 or more points in each of his last three NBA seasons and has averaged over nine rebounds per game in each of those campaigns.

The 6-foot-11 center recently entertained the idea of teaming up with fellow former Hoya Jeff Green on the Boston Celtics, saying he’d “weigh (his) options” after dropping 29 points on the Celtics in a Pistons win in early December.

Celtics president of basketball operations Danny Ainge said his team is unlikely to add a big man like Monroe before the offseason, and it seems unlikely that Boston willingly would part with a first-round pick during its rebuilding stage. Yet the Celtics and the Phoenix Suns still appear to be the top potential destinations for Monroe, according to Sporting News. 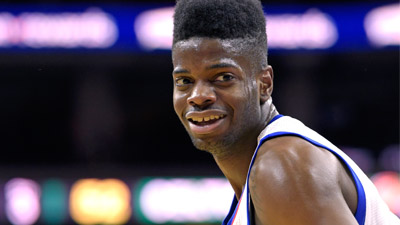