The San Francisco Giants are applying a full-court press in their pursuit of Jon Lester.

Lester’s agent, Seth Levinson, met with the Giants late Sunday night, according to USA TODAY’s Bob Nightengale. The Giants reportedly are hoping to strike a deal with the left-hander in the next couple of days.

It’s unclear whether the Giants are the front-runners to land Lester. The Boston Red Sox, Chicago Cubs and Los Angeles Dodgers also are in the mix, with Sox principal owner John Henry reportedly visiting Lester at the pitcher’s Atlanta home on Friday. The Lester saga could be nearing its conclusion, though, as FOX Sports’ Ken Rosenthal said Monday afternoon on MLB Network that he expects the three-time All-Star to sign during the ongoing winter meetings, which conclude Thursday.

Lester, who turns 31 in January, is coming off a season in which he went 16-11 with a 2.46 ERA. The Red Sox, who traded Lester to the Oakland Athletics at this year’s Major League Baseball non-waiver trade deadline, have expressed interest in a potential reunion several times this offseason. David Ortiz even requested last week that Boston “step up” in its pursuit.

An executive not involved in the Lester bidding predicted to Rosenthal that the lefty will land a seven-year contract. As Rosenthal notes, a seventh year could be a separator in negotiations.

UPDATE, Monday, 1:48 p.m. ET: It sounds like the interest could be mutual. 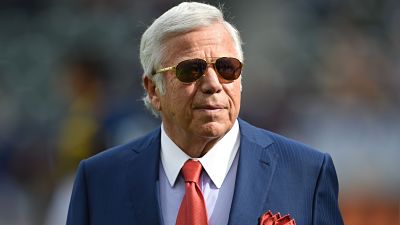 Robert Kraft Ranked No. 3 Most Influential Person In Sports Business