Sturridge is working out in Boston, hoping to ensure a speedy and permanent return from injuries, which have wrecked the first half of his 2014-15 season, according to the BBC and Liverpool Echo. Sturridge is using the Boston Red Sox’s facilities and working with both team doctors and Glen Driscoll, Liverpool’s head of performance, so he’ll be firing upon his return to action in the new year.

Sturridge, 25, will be in Boston through Christmas, according to the reports. Sturridge previously spent 10 days training in Los Angeles’ warm weather in order to accellerate his recovery.

Liverpool was counting on Sturridge to lead its attack in 2014-15, but he has played in just three games because of thigh and calf injuries. He has scored only one goal this season, and matching last term’s total of 21 Premier League goals now seems like an impossible task.

Sturridge suffered his latest setback Nov. 18, when his second thigh injury of the season sidelined him for six weeks.

Liverpool hopes to have Sturridge at its disposal by the New Year, and the England international’s return could not come soon enough. Liverpool’s other forwards have scored only one league goal in Sturridge’s abscence, and the Reds’ performances and results have been underwhelming.

Perhaps the Red Sox can have a decisive impact in improving the fortunes of their friends in Liverpool. 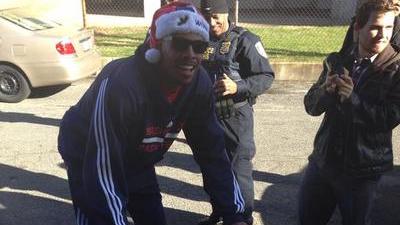 Tom Brady: Rob Gronkowski Has ‘Grown Up A Lot Over The Last Five Years’