The 2015 NHL All-Star Game at Nationwide Arena in Columbus, Ohio, was all about offense.

Team Toews and Team Foligno combined to score an All-Star Game-record 29 goals, with Team Toews earning a 17-12 win over Team Foligno. The teams produced so much offense that the famous Blue Jackets arena cannon stopped firing in the third period. The cannon did recover late in regulation, though.

Here’s a recap and highlights of the 60th NHL All-Star Game.

Right after Buffalo Sabres center Zemgus Girgensons messed up a 3-on-0 breakaway, NHL leading scorer and Philadelphia Flyers winger Jakub Voracek found the back of the net to give Team Toews its first lead.

Columbus Blue Jackets center Ryan Johansen evened the score with his first career ASG goal, much to the delight of the hometown crowd. Boston Bruins center Patrice Bergeron scored shortly after off a nice feed from Dallas Stars center Tyler Seguin behind the net. We saw that connection in Boston a few times.

Kevin Shattenkirk tied the score at 3 and became the first defenseman to find the back of the net. Johansen became the first mutli-goal scorer of the game with a one-timer following a pretty sequence of passing by Team Foligno.

John Tavares scored the eighth goal and final of the period by beating Price with patience and a great wrist shot.

Second Period
Pittsburgh Penguins goaltender Marc-Andre Fleury replaced Price in the Team Foligno net and gave up a goal 24 seconds into the period when Ryan Suter beat him with a wrister. This goal was the first of four scored in the first 2:27 of the period, with each team scoring twice.

New York Rangers winger Rick Nash got on the scoresheet with a goal at 4:08, which drew plenty of boos from the Blue Jackets fans that he played in front of for nine seasons from 2002-03 through 2011-12. Nashville Predators winger Filip Forsberg doubled Team Toews’ lead when he became the first rookie to score at the 5:56 mark.

Bergeron became the sixth player for Team Toews to reach three points with another assist on Tavares’ second goal. Voracek scored his second goal a little more than a minute later, which gave Team Toews a 10-6 advantage.

Tavares scored again to complete the hat trick, giving Bergeron another assist. It was the final goal given up by Fleury, who entered the All-Star Game record book for the wrong reasons. It took just 6:13 for the Bergeron-Tavares combo to strike for the fourth time. Bergeron assisted on all four of Tavares goals, and the Islanders captain became the sixth player to ever score four times in an All-Star Game.

Voracek completed a hat trick of his own at 7:30, with Toews and Florida Panthers rookie defenseman Aaron Ekblad each picking up their fourth assist on the goal. Each team scored three more goals to finish the game. Click for a recap of Patrice Bergeron’s All-Star debut >> 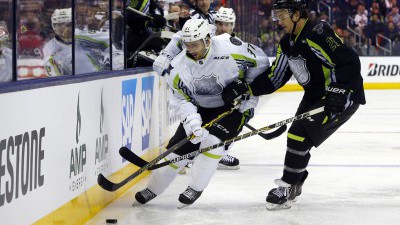 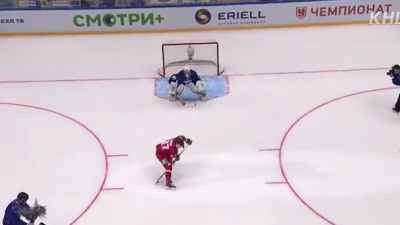