FOXBORO, Mass. — Bill Belichick had no intention of answering questions about DeflateGate on Thursday during his news conference at Gillette Stadium.

The New England Patriots head coach made an 8 1/2 minute statement on the latest controversy, then deflected questions on the matter, stating that “I?ve told you everything I know.”

The Patriots media workroom was packed with national and local media. All seats were taken, and the session was standing-room only.

Check out Belichick’s full statement and answers to reporters questions, as provided by the Patriots PR staff.

BB: I?ll start out by addressing the football issue here. When I came in Monday morning, I was shocked to learn of the news reports about the footballs. I had no knowledge whatsoever of this situation until Monday morning. I would say I?ve learned a lot more about this process in the last three days than I knew or have talked about it in the last 40 years that I have coached in this league. I had no knowledge of the various steps involved in the game balls and the process that happened between when they were prepared and went to the officials and went to the game. So, I?ve learned a lot about that. I obviously understand that each team has the opportunity to prepare the balls the way they want, give them to the officials and the game officials either approve or disapprove the balls. That really was the end of it for me until I learned a little bit more about this the last couple days.

Let me just say that my personal coaching philosophy, my mentality has always been to make things as difficult as possible for players in practice. So with regard to footballs, I?m sure that any current or past player of mine would tell you that the balls we practice with are as bad as they can be: wet, sticky, cold, slippery. However bad we can make them, I make them. Any time that players complain about the quality of the footballs, I make them worse and that stops the complaining. We never use the condition of the footballs as an excuse. We play with whatever or kick with whatever we have to use and that?s the way it is. That has never been a priority for me and I want the players to deal with a harder situation in practice than they?ll ever have to deal with in the game. Maybe that?s part of our ball security philosophy.

I?m trying to coach the team and that?s what I want to do. I think we all know that quarterbacks, kickers, specialists have certain preferences on footballs. They know a lot more about it than I do. They?re a lot more sensitive to it than I am. I hear them comment on it from time to time, but I can tell you and they will tell you that there is never any sympathy whatsoever from me on that subject. Zero. Tom?s [Brady] personal preferences on his footballs are something he can take about in much better detail and information than I could possibly provide. I could tell you that in my entire coaching career I have never talked to any player, staff member about football air pressure. That is not a subject that I have ever brought up. To me the footballs are approved by the league and game officials pregame and we play with what?s out there. That?s the only way that I have ever thought about that.

I?ve learned about the inflation range situation. Obviously with our footballs being inflated to the 12.5-pound range, any deflation would then take us under that specification limit. Knowing that now, in the future we will certainly inflate the footballs above that low level to account for any possible change during the game. As an example, if a ball deflated from 13.2 to 12.9 it wouldn?t matter. But if it deflated from 12.5 to 12.3 it would ? as an example. We will take steps in the future to make sure that we don?t put ourselves in that type of potential situation again.

The National Football League is investigating this situation. We have cooperated fully, quickly and completely with every request that they have made; [we] continue to be cooperative in any way that we can. I have no explanation for what happened. That?s what they?re looking into. So I can?t comment on what they?re doing. That?s something that you should talk to them about.

Again, my overall knowledge of football specifications, the overall process that happens on game day with the footballs is very limited. I would say that during the course of the game, I honestly never ? it probably has happened on an incomplete pass or something ? but I?ve never touched a game ball. It?s not something I have any familiarity with on that.

Again, I was completely and totally unaware of any of this that we?re talking about in the last couple days until Monday morning. Based on what I knew Sunday, Sunday night, thinking back on this, which I?ve done several times, [I] really can?t think of anything that I would have done differently, based on what I knew then, based on what I know now. I told you the one change we would make in the initial start level of the football pressure, but that?s really about it.

It?s unfortunate that this is a story coming off of two great playoff victories by our football team and our players. But again, we?ve been cooperative with the NFL investigation. We?ll continue to do so and we will turn all our attention and focus on to the Seattle Seahawks, a very well coached, talented, tough, competitive football team.

We?ve spent the last four days, three days, with our preparations and so forth for the trip. I think those are coming to a conclusion. We?re wrapping that up and we?re starting our preparations today with the Seahawks and practicing through the weekend. We?ll have a good, solid opportunity to get ourselves ready to go before we head down there.

Again, I have no further comment on the NFL investigation and I?ve told you all I know about the subject from my perspective. That?s where we are.

Q: What do you say to your critics?

BB: I have nothing ? I don?t have an explanation.

Q: Not withstanding what you?ve said here today, there are a lot people who are questioning your integrity, saying you will win at all costs.

Q: What do you say to critics who are challenging your character, which seems to go well beyond the sport of football?

Q: Any message to the fans who are watching all of this and are upset by this?

BB: I?ve told them everything I know. There?s nothing else I can add to it.

Q: What have you talked to Tom Brady about? I assume you?ve had conversations with Tom about this issue and what happened.

BB: I have no explanation for what happened.

Q: Why do you think these controversies continue to follow you?

BB: I don?t have any explanation for what happened.

Q: As many Super Bowls as you?ve been to, you know distractions come with the territory. What do you say to your younger players who don?t have the experience being in this spotlight like this as some of the older players?

BB: None of them are involved in this.

Q: How do you keep them focused though, with all this going on?

BB: None of them are involved in this.

Q: Does Tom Brady handle the ball after inspection with his ball boys?

BB: Those are all questions that should be directed to the league and that?s part of what they?re doing. That?s not what I?m doing.

Q: Is it possible that someone on your sideline, even though you may not know about it, might have deliberately altered the balls?

BB: I don?t have any explanation for what happened. I?ve told you all I can tell you from my point of view and anything coming from the investigative side, from the league, needs to be directed toward them.

Q: Why would you want to overinflate the balls [in the future] unless you think that somehow it [deflation] happens naturally?

BB: So there is no opportunity for a small margin of error that would put us under the specifications.

Q: Do you see any circumstances under which 11 of 12 footballs could have accidentally deflated?

BB: I don?t have any explanation for what happened.

BB: Well as I said, I?ve learned a lot about the process. I had no idea how the balls got from the officials locker room down on the field and so forth and so on and all of that. That?s not something I have ever thought or concerned myself about [on] game day. I?ve concerned myself with preparing and coaching the team. So some of the things like that that have been talked about, that have happened, I mean, I?m totally unaware of. 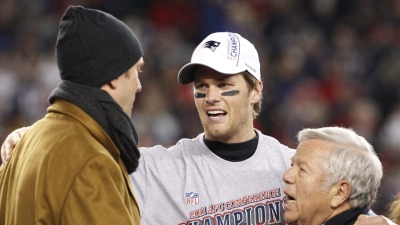