WILMINGTON, Mass. — Zdeno Chara has played in 12 games for the Boston Bruins since returning to the lineup after missing nearly two months with a PCL tear in his left knee suffered Oct. 23.

Chara hasn’t played at his usual Norris Trophy-caliber level at either end of the ice in those 12 games. It’s obvious that he’s not yet at 100 percent health, but the B’s captain and No. 1 defenseman said he is confident he will reach that level.

“It’s not there,” Chara said. “Myself, it’s not where I want it to be. I’ll keep working on it and keep making adjustments. I’ll get there. It’s just taking a little longer. That’s not an excuse. I just need to get back to my game as quick as possible.”

It’s to be expected that Chara would need some time to return to form, given his age (37) and the amount of games he missed.

The issue for the Bruins is they have a razor-thin margin for error given their current place in the standings. Boston’s offense also has struggled this season and ranks 21st in goals scored per game, which has put even more of an importance on Chara and the rest of the blue line’s performance.

“I still feel he’s one of the best defenders in the league,” Bruins head coach Claude Julien said. “Yet he’s coming off a major injury. You can’t tell me he’s 100 percent after being off for two months and having to make some adjustments with his equipment because of that injury.

“So, you’re seeing some flaws. It’s not his fault, it’s not because he’s not trying. Those are the challenges and realities we have to work trough.”

Even if Chara hasn’t dominated defensively and isn’t contributing much scoring, he’s still been an excellent driver of puck possession with a team-leading 57.58 Corsi-for percentage at even strength among defensemen. He’s also playing against the toughest competition among Bruins defensemen, as evidenced by his 1.89 Corsi Rel QoC rating.

The healthier Chara becomes, the better the Bruins will perform on the ice. He’s the focal point of the team’s defense and his ability to play in all types of situations (including both the power play and penalty kill) against the opposing team’s top forwards makes him arguably the most valuable player on the B’s.

In the meantime, the other Bruins defensemen have to play at a higher level while Chara works his way back to full strength. There have been too many mental mistakes in the defensive zone, which have cost the Bruins valuable points in the standings, over the last few weeks. 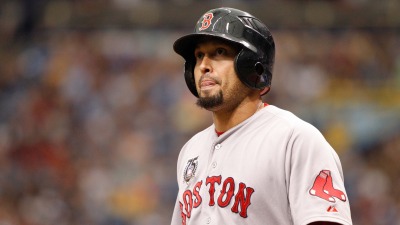 Shane Victorino Trains On Beach: ‘So Far, So Good’ In Recovery (Video)